"If A Picture Paint A Thousand Words..." 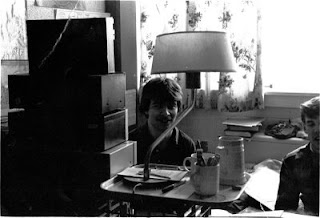 There are probably only about three or four pictures of me that I actually like; the rest range (in my opinion) from mildly bad to "I don't know why I didn't burn this already". Anyway, after years of not having this picture, I found it again in an old file.

Here's the story: it was, I think, late Fall of my Jr year in college, at Penn State Harrisburg. I was living in Wrisburg Hall (I'm sure I spelled that wrong), one of the two dorms on campus. One of the guys down the hall was taking pictures for a photography class, and he decided to snap this of me sitting me behind my "wall" of stereo equipment . Why I had that is a different story, probably for a different day, but never the less here you have the picture.

Now I really like this picture for a few reasons:

Most importantly, I think, is that the picture reminds me of a great time in my life. I was young, out on my own, and figuring things out. I made plenty of mistakes back then, but I would definitely go back and do it all over again if I were given the chance. That place...Penn State Harrisburg...was the right place for me to be at that age. It is a truly special place for me, and I make every effort to return every now and then. Yeah, I know, it sounds very "Glory Days" esque to say that, and in truth, there was no real "glory" for me back then. Instead, this is one of the two places early in my life where I think I got a glimpse of what I was capable of doing. I had problems then, but we all had problems. What's different about that place and time is that the possibilities were always far greater than the problems. This is probably why, to this very day, I still have dreams about being back at Penn State Harrisburg.

By the way, the guy on the bed was also named Steve...I'll probably get this wrong, but his name was Steve Mylack (forgive the butchering of the spelling Steve), I will remember fondly for singing "I Can't Wash These Dishes Any Longer" (a parody of "I Can't Fight This Feeling Any Longer" by REO Speedwagon) while working in the cafeteria dishroom. He was also famous for actually having any real success with the ladies at the time...at Penn State Harrisburg, back in the day, the ratio of males to females was something 4.5:1. Note that I had no success in that department.

So there you have it, one of my favorite pictures.

On another topic, it's the "day after" the dental work yesterday, and all is relatively well. I have some minor bleeding, and the antibiotic gives me a major case of heartburn, but otherwise no problems. I actually slept really well last night, which is no doubt due in part to the fact that I exhasusted myself yesterday worring about things. As is true for most things in life, the actual thought of it was wore than the actuality of it.
Created By Stephen Albert at 7:05 AM