My Theory: How Cats View The Universe 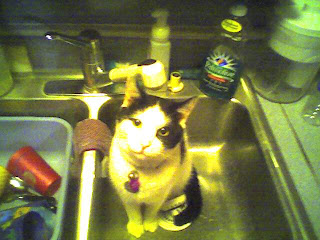 (Oreo the Cat, with his inverse widows peak)
As the owner of several cats (yes, I crossed that threshold of owning more than two cats, which qualifies me for the title of "weird cat person"), I have a theory about how cats view the universe. Now this could be based on things I've read, experiences, etc., but it goes something like this:

1. Prey - These are things that the cat would like to kill and eat...well the eating part would only happen if they were hungry; otherwise, they would just kill. This includes insects, rodents, birds, rabbits, etc. Mostly anything smaller than the cat that isn't a cat itself.

2. Predators - These are things that could harm the cat, like most dogs.

3. Other Cats - This is anything else on more or less an equal footing with the cat.

I put humans in category #3 in that I think most cats see their "owners" as being nothing more than really big cats. I know that there's the purring issue to deal with (that cats really don't, as far as I know, purr around each other....well I think kittens do when they are around their mothers), but I still think that cats view us as other cats. A cat may also view a human as being a predator, by virtue of its size. This is probably how wild or mis-treated cats view us. Maybe they view us as substitute mother cats to them, which also solves for the purring issue. I do know this: having more than one cat enables you to see what there are definite social orders in the world of cats, which is interesting for an animal that isn't known as a social creature. For the record, all my cats are male, which makes the social thing even more interesting, as male cats are supposedly known as loners.
Created By Stephen Albert at 9:15 AM

Email ThisBlogThis!Share to TwitterShare to FacebookShare to Pinterest
Labels: Cats