The Bon Ton...I'm Afraid It's Time For Goodbye Again

"Life is a series of hellos and goodbyesI'm afraid it's time for goodbye again"
- Billy Joel, Say Goodbye to Hollywood

The Bon Ton, as in all Bon Tons, will be closing for good soon (if not already).  As I've mentioned in the blog before, my first real job after graduating from college was working for the Bon Ton.  Back then it was known as S. Grumbacher and Son, and my tenure lasted from May of 1986 until December of 1988.  I actually worked in three different stores during this time with the company, with the final assignment being at the Bon Ton store #9, Carlisle Plaza Mall.  See This Posting for stuff I'm basically too lazy to re-type.

Also in the category of "Things that I'm not going to write about" is why the Bon Ton ended up failing.  If you are keenly interested in such stuff, watch This Video, which does a great job of dissecting the company's financials in a way that anyone can understand.  In summary, the company's reach exceeded its grasp.

I actually owe a debt of gratitude to the Bon Ton.  When I was graduating from college, I had two job offers: The Bon Ton and Kmart Apparel.  How ironic is that?  Two offers to work in two different companies that (in the case of Kmart) will be sharing the same fate.  Anyway, the folks at the Bon Ton believed in me and provided me with some much-needed structure and stability in my young adult life.  They also gave me an opportunity to stay outside of northeastern Pennsylvania for a few years, which I do think was truly a good thing.  In point of fact, I don't think you can truly appreciate a place until you've been away from it for a while.

As a bit of a side note, I visited the Bon Ton in the Midway Shopping center as it was closing.  While the trip ended up with me acquiring a new pair of jeans, there was something even better to be had:  Shelving.  Much shelving.  Slightly used laminate shelving that I'm going to be using around the house for various projects, including one where I installed a folding work surface on our second floor enclosed porch. 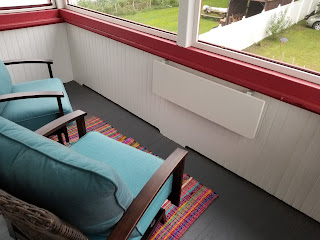 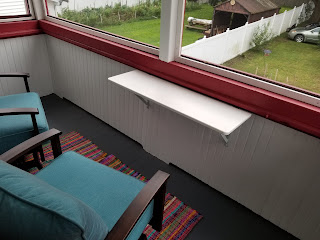 Expect some porch written postings in the not-too-distant future.  By the way, one piece of the shelving was used on the porch (above); I have nine more available for the "other stuff".

Moving beyond the creative use of former department store hardware, I can't help but feel a tinge of personal sadness in the closing of the Bon Ton.  I've seen this kind of thing before:  Icons of my life that I think should be outliving me, but yet haven't.  My high school... 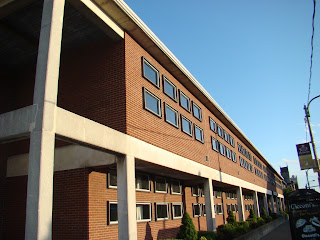 (The former Bishop Hannan H.S., now some kind of nebulous Diocese of Scranton center for stuff.) 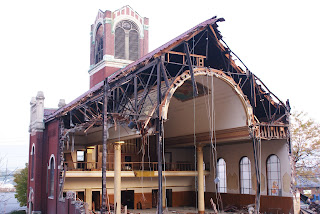 (The demolition of Holy Family Church in Scranton.)

...are but two other examples.  I'll note that neither place offers what I would consider as being "fond" memories for me, but they were fixtures in my life never the less.

In the final analysis, I suspect that this is all a part of growing older:  Namely experiencing a kind of loss that may seem trivial but yet still touches you at your very core.

Created By Stephen Albert at 9:33 PM

Email ThisBlogThis!Share to TwitterShare to FacebookShare to Pinterest
Labels: Me (Professional), Me. Deep Thoughts, Music, Photography