My first "real" professional job...where I had responsibilities and people reporting to me...was at the Bon Ton in Carlisle, Pennsylvania.  Back in those days, it was referred to as "Store #9".

Rewinding a bit, I was hired as a management trainee by what was "S. Grumbacher and Son", the department store chain that owned the Bon Ton, Maxwells, half of a Mailmans store and probably something else I've long since forgotten.  This company would eventually become Bon Ton Stores, Inc.  The actual "trainee" part was supposed to take some measure of time that I also have forgotten, but as I recall(1), I finished the whole trainee process pretty quickly.  My first real job with the company was basically that of an assistant store manager at the Bon Ton in Carlisle, PA.  I was there for about a year and a half. 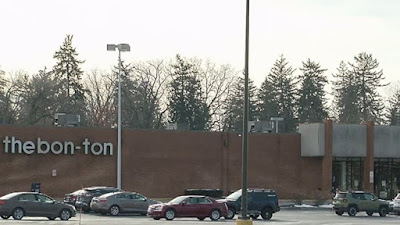 Fast forward to January 31, 2018, and the Bon Ton announced that 42 of its locations would be closing, including the Carlisle location.

I think this is one of the things that happens as you get older:  Things you knew in your younger days fade away, die off, or otherwise are transformed such that they no longer seem all that familiar.

What do I remember from those days?  Mostly random things...

...feeling awkward supervising folks who were much older than I was
...really not knowing how store inventory worked
...enjoying having two slices of pizza and a coke for lunch inside the mall
...my store manager, a nice man named Ron Blasser
...one of my worst professional experiences ever via a store inspection

I ended up leaving the Bon Ton for another employer that I would end up staying with for nearly 28 years.

Over the years I visited the store a few times when I just happened to be in the Carlisle area.  It looked shockingly the same each time I was there.

I know there's probably a longer posting to be written about how the Bon Ton got into this pickle in the first place, but while I'm thinking about the subject, I will share a few thoughts and experiences.

Maybe Why The Bon Ton Is Failing


In any event, I hope the company does bounce back, not just for the sake of this guy's memories, but because there is something special about shopping for something important when you get to see, smell, and touch the merchandise.

Email ThisBlogThis!Share to TwitterShare to FacebookShare to Pinterest
Labels: Business, Me (Professional), News