On the Baltic Sea, Heading to Poland

"You need to bring your passport with you" was the instruction today as we headed out to Rostock, Germany.  After having visited two other countries without needing to bring a passport my mind got to work.  Now given the fact that I am both a student of history and known to be somewhat snarky, I almost immediately went to something along the lines of...

What you don't want to happen in Germany: Have someone come up to you & say "Papers...can I see your papers?"
(Said with a thick German accent)

...if you don't get that last point, well, don't worry about it.  Attribute this to the fact that I have a vivid imagination and I've simply seen too many World War II (WW2) movies in my lifetime.

In any event, today was a great day.  The morning was spent on a guided tour of Rostock, a former East German city, and a major port.  We had a terrific tour guide, a native of Rostock, who was old enough to remember life before the fall of the Berlin Wall.  Learning about the city, especially during World War II and afterward, was fascinating.  Rostock was heavily bombed by the Royal Air Force (RAF) during the war, mostly because of the Heinkel and Arado aircraft factories found in the vicinity. 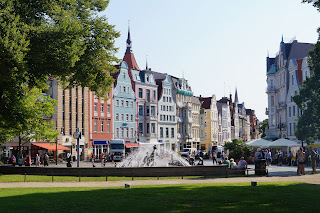 (Center City, Rostock; all of this was basically destroyed during WW2) 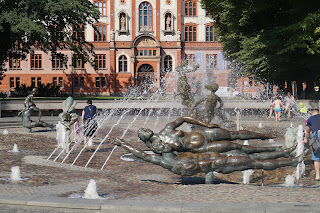 (The fountain; see directly below) 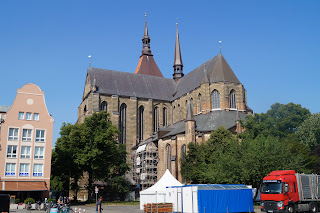 (Saint Mary's Church, one of the few buildings not destroyed during WW2)

We spent the afternoon in the resort town on Warnemunde, which kind of reminds you of a classy version of a higher-end Maryland beach community.  Except of course for all the Germans.  The architecture is very similar to that of Rostock. 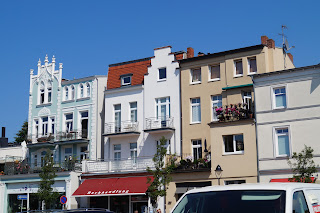 (A row of shops in Warnemunde)

Still no pickup trucks, by the way.  What I have noticed is that some passenger cars have this weird (by U.S. standards) rear hitch that seems to be something of a Northern European standard. 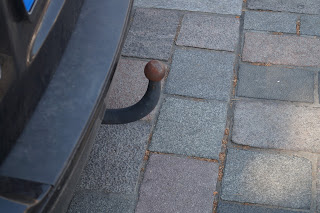 While I can normally only get about six photos in an average posting, I'm going to see if the Blogger gods will smile upon me and allow one more. 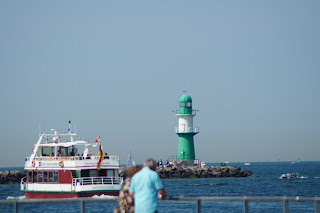 (One of two harbor lighthouses; its companion was red)

A few observations:
On a final note, I try not to take too many photos with my cell phone, mostly because I have a lot of money tied up in expensive photography stuff.  What's the sense in having an expensive camera if you don't use it?  Anyway, after dinner, Ms. Rivers and I were strolling on the second-floor deck of the ship and we spied a wonderful sunset, which I just had to capture.  The sun is actually setting over Germany and/or Denmark. 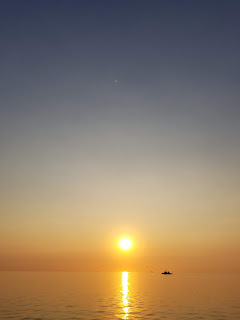 The next port of call is in Poland.

Created By Stephen Albert at 1:49 AM