Road Apples
I haven't written a Road Apples posting in almost a year.  Part of it, I have to confess, is the fact that I tend to view them as being less interesting.  The hit counts tell me that they are less interesting to others as well, not that (in theory) I care about such things.  Anyway, and who cares, for here goes.

"Body Shaming"
I put the term in quotes because, in part, the whole premise of the activity is questionable, at best.  In point of fact, none of us should care less what anyone else looks like, period.  Now if someone is in your family and, for example, you are concerned that their excess weight may create health issues, well then, by all means, do talk to them about it.  But to criticize some person you don't know because they don't meet your standards of beauty?  Simply ridiculous, on many levels.

About 4 Years
That's the amount of time I think I have left in me for serious, middle-of-the-day in the summer yard work.  One outcome from this weekend's work?  If my heart were truly bad, I would already be on a slab at this very moment, so I guess that's a good sign.

They Love Me
Mosquitos, that is.  I was using the pressure washer on Saturday afternoon (a gas one...strong enough to strip the skin off your feet if you're not careful), and when all is said and done, I think I easily got at least six mosquito bites from the endeavor.  Granted that popularity has never been something I've been good at in my lifetime, but it would be nice if what little I did have wasn't wasted on invertebrates.

Blog-O-Versary
The ten-year anniversary of this blog occurs on October 27, 2018.  I know this because I put it on a label that is plastered on the monitor from which I actually see this text as I am typing.  I guess I should save the deep (and other) thoughts until then.

Sign of the Times
Fall is, in theory, my favorite time of the year, and as today is Labor Day, it's not too far around the corner.  In as much as I don't enjoy the really cold weather once it arrives, I do enjoy the change from the really hot stuff that July and August bring.  I'm already starting to go through my warm weather clothing, figuring out what I haven't worn so that it can be donated.

The Upcoming Schism
The Catholic Church is, in my estimation, nearly at the point of a major schism.  There's a longer post in that topic, but if you are at all interested in religion...from a spiritual or an academic perspective...then pay attention over the next few years.  Deeply conservative Catholics are leveraging the abuse of children as a means to force Pope Francis to resign.  This isn' about the abuse of children, by the way, it's about a Pope that they feel isn't doctrinally conservative enough for their tastes.  Case in point:  If this were about the clerical abuse of children, then John Paul II would never have been canonized.  More to come.

Conference on Youth
Philadelphia Catholic Archbishop Chaput has asked that the Church's upcoming Conference on Youth be canceled and in its place, a synod should be held on the life of bishops.  You can read more at this link.  While I understand the sad but ironic twist that accompanies a conference on youth has for the Church, simply being more internally focused isn't the answer.  How about a synod on the culture of a church that, for some bishops, fostered the abuse of children instead?

Doors
During our recent cruise to Northern Europe, I took about 1600 photographs.  Two of my favorite photographs are of doors. 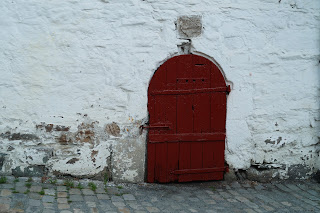 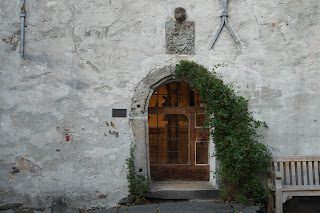 I think there's a bigger meaning to this, but I'm at a loss to figure it out at the moment.

Labor Day
Today is Labor Day, and regardless of one's political orientation, I think we can all agree that our country sometimes devalues hard work and labor.  There is a nobility to be found in working with your hands to accomplish something, be it constructing a house or cutting your grass.  As a wise person once told me, the most important person in the world isn't a political or a corporate CEO...it's a plumber when you have blocked up toilet on a Sunday.

Created By Stephen Albert at 11:23 AM