On the Baltic Sea

If I were to poll 1,000 different Americans and asked them to find Tallin on a map, I think that about 986 would answer something along the lines of "I have no idea" or maybe "yeah, isn't that somewhere in New Jersey?".  Granted that Americans are (in)famously challenged when it comes to geography in general; add in little-known lands and, well, the odds just don't look good.  By way of full disclosure, I was nearly a geography major in college so I can say that, even as a younger man, I knew of Tallinn (and Estonia, as well as the rest of the Baltic states).  I'll confess though that this knowledge hasn't really benefited me all that much, well until now.

Anyway, Tallinn, Estonia, is best described in comparison to Gdansk, Poland.  Both:
The above is pretty much where the similarities end.  Where the port of Gdansk is overgrown and industrial looking, Tallinn has a modern port that invites tourists and also has actual security(*).  Another key difference between the two cities is in the area of basic cleanliness:  Tallinn was one of the cleanest cities I've ever seen, anywhere.  Granted that Gdansk was in the throws of a festival when we visited, but outside of the St. Dominic's Fair crowds, the outskirts of the city were simply run-down looking; not so with Tallinn, where everything seemed to well cared-for and in its place.

Tallinn is, simply put, a beautiful place.  Here's some proof. 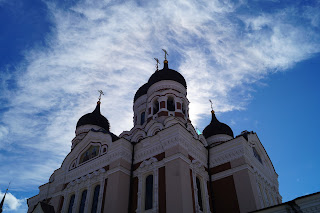 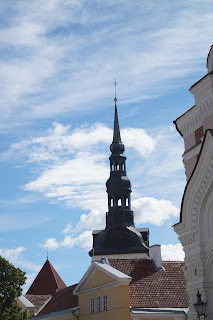 (The spire of the Tallinn Town Hall) 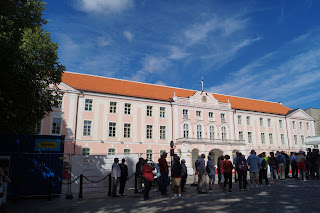 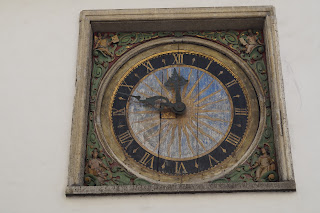 (The clock on the side of The Holy Spirit Church, one of the oldest functioning clocks in Europe) 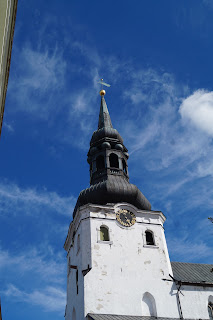 (Spire of the Domed Cathedral) 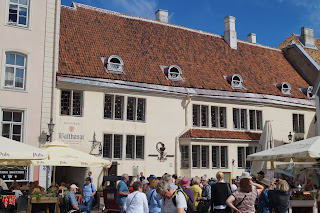 (On Tallinn Town Square:  The Garlic Restaurant & one of the oldest pharmacies in Europe) 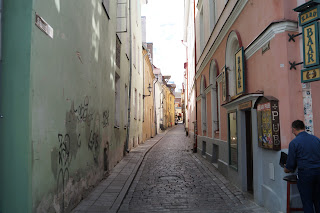 (An alleyway in Tallinn) 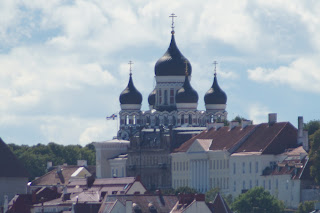 (From the ship with the zoom lens:  The Cathedral of St. Alexander Nevsky)

Lastly, while crime isn't much of an issue in the city, the authorities in Tallinn would like to remind you to beware of pick-pockets. 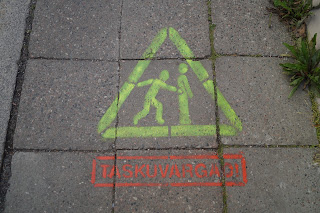 Tomorrow we said into St. Petersburg, Russia.  That brings me to the story of 3,000 rubles.

Coming back to the port of Tallinn in the early afternoon, we stopped by a few shops located in the area of our ship.  I wasn't looking for anything in particular, but I did see a currency exchange service.  Knowing that we are next headed to Russia, I thought it might be a good idea to get some of the local currency in advance, as I'm a little wary of money dealings in a country not necessarily known for strong financial controls.  Anyway, since I hadn't checked the exchange rate, I just picked a number...$60...as what I would produce for the transaction.  Now I know how exchange rates work (and even concepts such as arbitrage), so I guess I shouldn't be surprised, but sure enough that worked out to about 3,000 rubles.  Fortunately, I ended up getting a 1,000 and a few 500 ruble notes, so as to not over-stuff my wallet.  I'll try not to spend it all in one place.

(*) In Tallinn, there was the usual cruise ship security plus a checkpoint with a guard that made sure that only authorized vehicles got close to the actual port.  In Gdansk, well, pretty much anyone could drive right up to the ship.
Created By Stephen Albert at 11:28 PM