Faith of My Fathers

I actually didn't know all that much about the late Senator John McCain prior to his running for President many years ago, so I read his book, Faith of My Fathers. 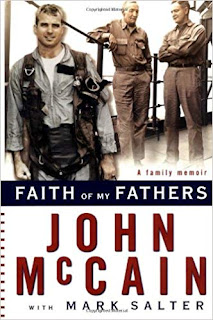 The book is engaging, and I recommend it to anyone wanting to learn about the late Senator and the service of his family in the United States Navy.

I ended up not voting for Senator McCain, mostly because of his selection of Sarah Palin for a running mate.  I understand the reasoning behind his choice, and while it cost him a vote, I never lost respect for the man.  A shocking idea in American politics today:  I can disagree with him, but yet still respect him.

In any event, American politics has been diminished today with the passing of Senator John McCain.  He was, in spite of what some may say, a true American hero.

Created By Stephen Albert at 2:56 PM