On the Vistula River, Gdansk, Poland

Not everything is, or in fact even should be, glamorous.

Which brings me to Gdansk, Poland.

This is not an attractive city.  I'm not writing that in a mean-spirited way, but it is something of an honest observation.  The docking area for Gdansk is basically more industrial than anything else.  Gdansk does hold a special place in recent history as being basically the first blowtorch to the former Iron Curtain of Eastern Europe.  Whatever snarkiness is found in this posting is all in good fun; how Gdansk and its residents contributed to the cause of freedom in Europe was a very serious business, and the western world owes a debt of gratitude to the city.

Side note:  As I begin to type this, a small boat, filled with what I assume to be drunken Gdansk residents, is moving past our ship.  Fortunately, as I don't speak Polish, I can't understand what they are yelling. Somehow I don't think it translates to "Hello cruise ship peoples.  We hope you enjoyed short stay in city Gdansk.  Please do come back much again times!".

Anyway, while Rostock was also a former Eastern Bloc city, it's clear that the German government has had the resources to invest heavily in redevelopment over the past few decades.  Gdansk?  Not so much. 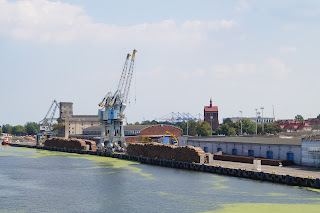 (The view from our cabin upon arrival; "We have many lumbers for exports!")

Now in all fairness, the old city area of Gdansk definitely has that older European charm. 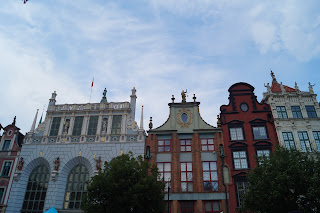 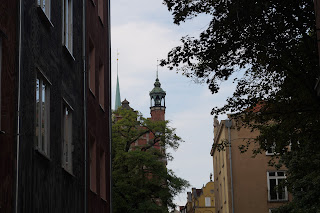 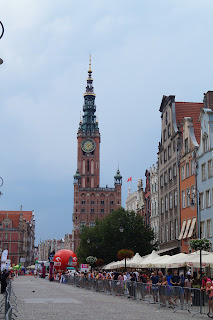 Today was St. Dominic's Fair in Gdansk, which meant significantly more people and congestion in the city.  It also made your's truly pretty uncomfortable when I was squeezed under an archway with about 100 others while a thunderstorm blew through the city.  I'm not wild about being touched; well I am if I know you well, otherwise, it rather creeps me out.  As shown above, part of the events associated with St. Dominic's Fair was some kind of race.

Another feature of Gdansk is amber, as in the petrified tree sap stuff that traps bugs and created Jurassic Park.  Amber is a big commodity for sale in Gdansk, and we found many shops selling it during our brief time in the city.  Some of the amber jewelry was very attractive.

Another side note:  As I am typing this, a police boat appeared alongside our ship.  Apparently, the first boat wasn't the only one riding the Vistula River while enjoying adult beverages. 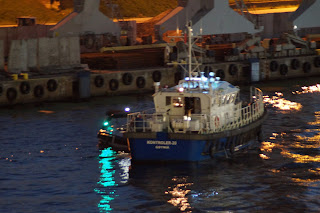 Like many other continental European cities, Gdansk suffered quite a bit during World War II, although it does seem as if there still some areas that are just now being rebuilt, all these years later. 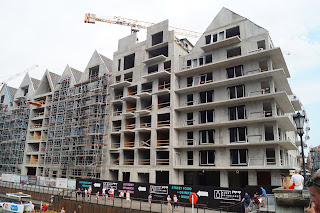 Observations:
Tomorrow is actually a day at sea.  I'm not actually sure that will generate enough interesting stuff to warrant a posting.  Oh, who am I kidding...

Created By Stephen Albert at 2:15 AM