One of the Russian words for angel-like creatures sounds, when spoken by a native speaker, an awful lot like "Putin" to this person from the United States.  I kid you not.

Today was our second day in St. Petersburg, Russia.  In some ways, I am conflicted about our stay.  On one hand, it would have been nice to have more time in St. Petersburg, as there is just so much to see and learn.  On the other hand, this is a place that doesn't lend itself, at least in my opinion, to independent exploration by foreigners.  Make no mistake about it:  While the Russians enjoy the benefits of tourism(1), they aren't adapting all that much to tourists.  The vast, vast majority of the signage is just in Russian (how dare they!), and it seems from my experiences that most Russian's don't speak English(2) all that well (if at all...again, their country, they can do what they want).  Navigating crowds in St. Petersburg, be it in a church or on the street, also takes a special kind of expertise that may only be available to big city cab-drivers.  Finally, I'm convinced that Russians are genetically incapable of the false smile that's a must-have for any self-respecting tourist town; this may not, by the way, be a bad thing.

Then there's port security.  Leaving our ship for the first time, we had to pass through what was effectively an international border, complete with stern folks wearing uniforms, who compared our passport photo to our actual face and then issued various stamps.  We had to go back through a similar process on the way back to the ship.  Now given that Russia seems to be something of a target for terrorism(3), I can understand the tight security.  However, it also doesn't exactly scream "Welcome to Mother Russia!  Please stay and spend your money!".  Also, this has been our first stop where there wasn't time built into agendas for local shopping (see above).  Mind you, there are two shops near the port, but...I kid you not...there so bright with trinkets and lighting on glass shelves that I felt as if I were going to need a welder's mask just to walk by.  Also, I can't end this paragraph without mentioning that my brother-in-law's wife was nearly accosted by the man wearing a bear costume in a public park yesterday(4).

All of the above duly noted, our time in Russia reinforces the idea I expressed towards the beginning of this trip, namely that people are people no matter where you go.  Yes, there are those differences that kind of slap you up-side the head, such as language, but there are also plenty of universal things holding us together as well, such as basic human kindness and the frustrations that come with traffic jams (be they in Philadelphia or St. Petersburg).  St. Petersburg has laborers, cops, road construction, hipsters, modern buildings and dilapidated ones, and all of the other things that make up a modern society today.  It's much less "them" and more like "us" than some would have you believe.

Commentary completed.  On to some pictures. 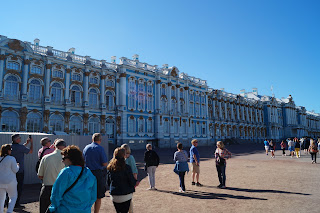 (The front of the palace; the picture doesn't do the size justice) 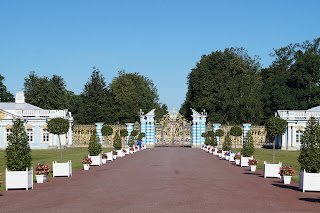 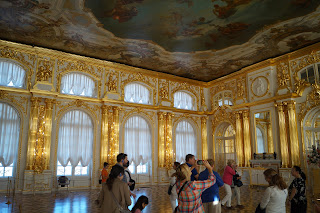 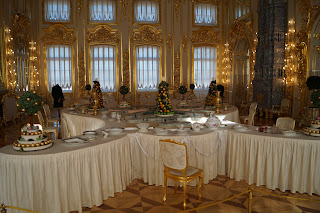 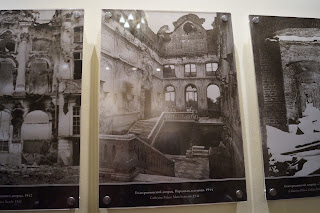 (The main staircase, after the NAZIs were finished with the palace during World War 2) 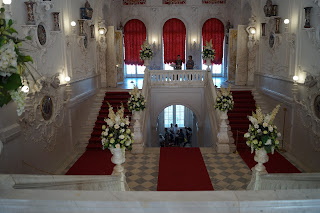 (The main staircase, after rebuilding)

I'm limited to the number of photos I can share, but the grounds of the palace are simply beautiful.

Miscellaneous St. Petersburg
While I have a few more megabytes available for this posting, here are a few additional photographs of the city. 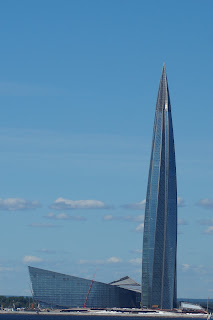 (The locals say this looks like a giant corn cob; it's a new building for Gazprom) 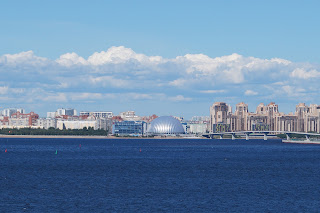 (Something of a skyline) 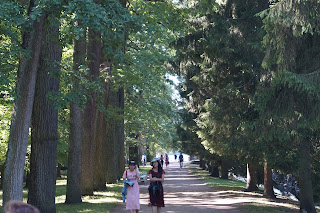 (Okay, I lied...here's a photo of the Catherine Palance grounds)

For the record, I took a total of 375 photos with my Sony Alpha, plus about a dozen more with the cell phone in St. Petersburg.  Deciding what to share, when I can only pick about 7 to 9, is pretty tough.  Anyway, attribute that one to #FirstWorldProblems.

Tomorrow we land in Helsinki, Finland.

(1) I counted, at one point, five cruise ships in port at St. Petersburg.
(2) Unlike, say, most Norwegians, who seem to speak English better than the entire population of Nanticoke, Pennsylvania.
(3) Google Chechnya.  The root causes of that conflict can be debated.
(4) I know, that point doesn't exactly fit in with the rest of the paragraph, but seriously, where else could I put it?  A transition to "nearly accosted by someone wearing a bear costume in a Russian park" is tough to construct.

Created By Stephen Albert at 12:06 AM