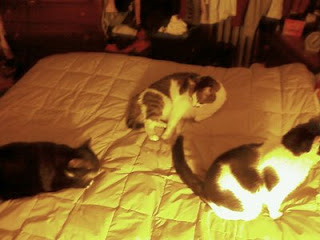 Cats
It's rare to get all four of our cats to stay still in the same place. I suppose that's because cats are not the herding type. Anyway, from the left you have Thurber, Buttons and Oreo. Missing is Bella, who really is just a strange critter.

Spelling
Did you ever look at a simple word that you've written, say "apples" and think, "that can't be spelled right?" but yet it is? Maybe it's just me.

It's Darn Cold Outside
It was less than a degree above zero here this morning. Spring can't spring soon enough for me. The good news is that average temperatures actually do increase in February in these parts, so there is hope. I'm still also hoping for some global warming; that can come any day now.

Katrina's Rolling 21st Birthday Celebration
Another celebration of Katrina's 21st birthday happened yesterday, this time at Chuck-E-Cheese, home of some of the worst tasting pizza I have ever had the misfortune to consume, ever. I do confess, however, to having fun playing the Star Wars video game, although I probably cheesed off a few 10 year olds who wanted to play it while I was ("Mommy why won't that old man let me play the game?"). Oh, for the record, my present to Katrina was a TomTom GPS system. It's something she has wanted, and from what I can tell she liked it. You only turn 21 once.

Facebook
I find Facebook interesting. I've had a page for a few weeks now [you can look me up in any number of ways...please feel free to find me and make me your friend], and while I'm normally a pretty tech-savvy guy, I find the interface that it uses to be somewhat quirky, to say the least. The search capability pulls in a lot of results, but it also has some logic that prioritizes your results, I think based on the "networks" you are in. Along these lines, I listed the name of my employer in it's simplest form, but then thought I should be more specific as to the division of my employer; sure enough Facebook didn't let me change the name. What did it allow me to do? Delete the employment all together and re-enter it; sure enough this time it took the revised name. Oh well, I'm just wondering what will be the next big "thing", after Facebook runs its course.

One other thing: while the searching capability on Facebook is quirky, it is still somewhat addictive. I've spent more than an hour at a clip just looking at profiles, etc. I've seen some people I've not seen in 25 years or more. This is, I think, one of the real powers of the Internet...it can really bring people together.

In The Conspiracy Department
Wasn't Barack Obama supposed to take the Presidential Oath of Office using the Koran? Funny, I heard he actually used the Lincoln bible. Strange indeed. Maybe, just maybe, he really is just this ambitious, hard-working and smart young former Senator from Illinois.

Dr Dean Edell
There are two terrestrial (as opposed to satellite) radio programs I regularly listen to: a local morning talk show (Morning News with Nancy and Kevin on WILK) and the Dr Dean Edell show, which airs on Sunday mornings. I love Dr Dean. I have one of his books ("Eat Drink and Be Merry"), and I find him to be a real straight-shooter. Lots of logic, lots of common sense, lots of asking good questions and questioning conventions. I highly recommend Dr Dean to anyone who has an interest in health, science or just plain logic.
Created By Stephen Albert at 9:02 AM