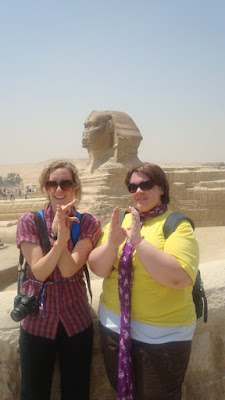 Well I picked up my oldest daughter yesterday afternoon in Philadelphia, as she arrived from Cairo via Frankfurt. As I may have noted before, she spent May studying abroad in Egypt, a once-in-a-lifetime opportunity that I am glad she got, even if her digestive system wasn't.

A few random thoughts that I culled from her experience:

Garbage - There is garbage everywhere in Egypt. She showed me a picture of this river that was literally blocked by a dam of garbage. There aren't garbage cans out in public; apparently if you have waste you just throw it outside. They were thrilled when they landed in Frankfurt and immediately saw a trashcan at the airport. Got to love that in-bred German sense of cleanliness.

Cats - In addition to garbage, there are cats everywhere. They just wander everywhere...hotels, mosques, shoppes, etc. It's kind of cool actually.

The Food - Just about everyone on their tour got almost immediately sick from the local food. It's much, much more spicy than we are used to. They were thrilled when they got to go to mall in Alexandria where there was a McDonald's. Apparently Chicken McNugget taste exactly the same everywhere in the world.

The Air - It's so thick and polluted that Cairo is covered in an almost constant haze. It's like LA on a bad day, all the time. It's a combination of everyone cooking with God knows what & all those crappy little weed-wacker engine powered cars that they drive over there.

They Love Americans - There seem to be rules for foreigners traveling in Egypt, most of which are waived if you are an American. Oh, and all Egyptians know who Obama is. He's more popular over there than he is here.

There is Real Poverty There - There are kids that go out and beg for tourist money as a kind of "job". It's incredibly sad. Want a picture taken with a cute local? That will be some pounds please.

It's Incredibly Cheap - She bought three pair of leather shoes for the equivalent of $50.

It's Secure - She was very, very impressed with how local police and security looked after tourists. They would literally get escorts where ever they went. And those dudes were well armed. Clearly, Egypt knows that they are just one incident away from killing the goose that laid the golden egg...tourism...so they take the security stuff seriously.

The Airport at Frankfurt is Very Secure - She referred to the well-armed German airport security as "the Gestapo". I asked her if she said that when she was there...she said no...I said "good idea...for some bizarre reason they don't think the NAZI references are very funny in Germany".


I told her that the whole experience should remind her of how truly blessed we are to live in this country. Yes, we have problems, but they pale in comparison to how other people are forced to live in certain parts of the world.
Created By Stephen Albert at 6:44 AM