California Judge Gets One Right 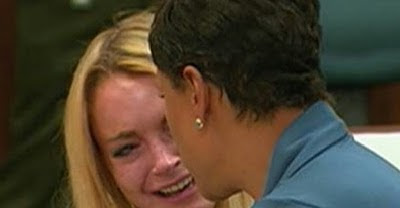 For years I would see pictures of Hollywood starlets (a.k.a. "pop tarts") such as Paris Hilton and Lindsey Lohan in clubs looking several sheets to the wind. As if that wasn't pitiful enough, I'm positive that many of these pictures in the past were taken when they were under the legal drinking age of 21.

Now why would I care? I'm not a fan of Ms Lohan's movies and as far as I can tell Ms Hilton doesn't actually do anything to be a fan of, so what's the big deal? Well it's a basic issue of fairness and hypocrisy. If it were your kid or mine getting caught in a bar while being under age they would be be in trouble. However in the bizarro world that is Southern California, where fame trumps propriety, little things like a law enforcement were secondary to fame.

It's against this backdrop that I read where Superior Court Judge Marsha Revel sentenced Lindsay Lohan to 90 days in jail for violating the conditions of her parole. You can read the story HERE. To Judge Revel I say a hearty "Bravo!". It's about time that the law be equally enforced, regardless of race, creed, color or (in this case) fame.

I know that Ms Lohan has a family that would mortify Gomez and Morticia. I know she is probably got more chemicals flowing through her veins right now than your average cancer patient. I know it's tough to be constantly told you are wonderful and then have to face the fact that you aren't. Cry me a river, as I also know that if you break the law there are consequences. Even for Lindsay Lohan it seems.

Maybe, just maybe, this is the best possible thing that could ever happen to the "Mean Girls" star. Thanks Judge Revel not only helping Lindsay but for also showing that the law applies to everyone.
Created By Stephen Albert at 10:34 PM