My first job out of college was working for Bon Ton Stores (at the time known as S. Grumbacher & Sons), so to this very day I do have something of an interest in retail.  My youngest daughter would call that "gay" for a middle-aged guy, but so be it as I've already noted that said term comes up quite often in her dad vocabulary.  Anyway, it is with that mentality in mind that I made a pilgrimage yesterday to something of a retail mecca, IKEA. 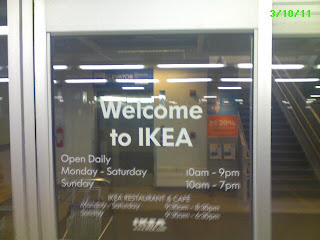 Bottom line:  I was really blown away.

IKEA does something that really great retailers do:  they make it more than just about acquiring stuff.  Going to IKEA is something of an experience.  Hell, there is even a specific way you need to shop.  You start out at the top floor showroom and follow a guided path through a series of displays that show IKEA products functionally used.  Think furniture showroom, but really cool looking furniture at very reasonable prices. 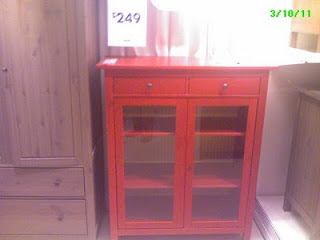 Now IKEA is a home furnishings store by trade, but they also sell a wide variety of stuff that runs the gamut from dishtowels (I got a few) to chocolate (I got some) to lighting (got that too) as well as "stylish, reasonably priced, you assemble" furniture.

Back to the experience.

So you walk through this guided tour of IKEA designs for the use of their products, with constant distractions provided by bins of smaller, really cool stuff (as noted above, that's where my money went yesterday).  I could have spent two hours just wandering the path.  The path ends where you started, but this time you front the IKEA cafeteria.  Oh, and yes, they do prominently sell Swedish meatballs in the cafeteria.  Therein lies another neat thing about IKEA:  when I was a very young man, many of the cool department stores had restaurants.  IKEA is, by very definition, cool.

The merchandise is by and large simply packaged with lots of notations about who designed that particular product.  That was also impressive, as it made you feel like that $5.00 lamp was somehow a "designer" piece.

After leaving the showroom, you go downstairs to a more traditional retail space where you can find bulk displayed smaller goods.  That section takes you to the area where you pick up any furniture/large goods you found in the showroom (I there is a whole system for noting item numbers, etc.; again, think "experience").  That space reminds me of Sam's Club, except for the fact that, unlike Sam's Club, it's NOT the entire store.  You end up, eventually, at a checkout.  Most people who shop at IKEA seem to do the self-checkout deal, but I needed a bit more assistance so I opted for the more traditional ring-out.  The associate who helped me warned that I would have to buy a bag, for a whopping $0.50.

The final toll for me at IKEA was about an hour and a half of time and a $38 debit to my checking account (for which IKEA gave me a 1% credit by the way).  the take?  Dish towels, a whole bunch of pant hangers (2 for a dollar), an under-cabinet light for my kitchen, chocolate (made in Sweden), some shelf brackets, a wall-mounted mirror for my bathroom and probably a few other things that I'm forgetting.

I left IKEA with two complaints:

Neither are game changers in my book.

Email ThisBlogThis!Share to TwitterShare to FacebookShare to Pinterest
Labels: Business, Me