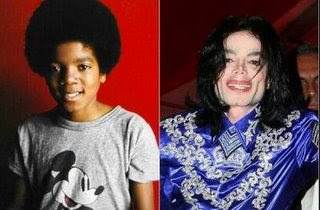 Michael Jackson Set For Comeback
Yes, you know the end is near when there is at least a strong possibility that the "gloved one" (also known as the "Man who was formerly black") is poised for a series of shows at London's O2 arena. Roger Friedman's gossip page on FoxNews ...the Fox411...is the best place on Earth to keep track of what el-Weirdo is doing. If I were a betting man I'd say that this never actually happens.

Now why does this bother me?

I was born in 1964, so my youngest years were really at the peak of the Civil Rights movement. In fact, one of my earliest memories was being walked to Pre-School the by older brother of one of my classmates, who happened to be Black. In those years, what you heard was the message that people should be proud of who they are; in fact, that seems to me to be a point of the whole Civil Rights Movement, namely that if you are black, you should proud of it.

In that backdrop you have Michael Jackson, who, even if you don't like his music (which I don't), you have to admit has some talent. You also have to admit that he was an a-typical African-American...at least as a kid. I am not a very good judge of looks when it comes to guys, but it seems to me that he was an average looking kid...not hideous by any stretch of the imagination. Why then the transformation from black child to adult alien? I mean Jackson doesn't even look human these days.

What kind of demons drive someone to make the kind of radical changes Jackson has made to himself over the years? Oh, and I don't buy the whole "skin disease" pile of crap Jackson tried to pedal years ago by the way. Whatever these demons are, I'm afraid that they have taken up permanent residence in Jackson's head. No, this is one dude who is never going to get better.

There is a real shame in all of this I suppose, and it's the shame of wasted ability. Again, I don't like the music this guy has made, but I'm not the be-all-end-all when it comes to musical taste either. Some folks like what he has done over the years, and there is no doubt in my mind that he has brought some measure of happiness to the lives of others. Funny, but here is a guy who can bring happiness to others, but seems incapable of apparently feeling it himself. Life can be horribly ironic like that...horribly ironic.

One day in the future, someone is going to write a really cool song about Michael Jackson...along the same theme as Elton John's "Candle In The Wind" (listen to the original version on Goodbye Yellow Brick Road, not the crap Elton recycled when Diana Spencer died). Speaking of ironic...
Created By Stephen Albert at 6:54 AM

Email ThisBlogThis!Share to TwitterShare to FacebookShare to Pinterest
Labels: Life