"Change is the end result of all true learning."
(Leo Buscaglia)

1.  The view may not always worth the hike.
In 2018 I earned a Master of Science degree as well as a senior Human Resources professional designation.  Yet try as I might to have some sense of pride or at least comfort in both, for the most part, what comes to mind is a kind of tired feeling.  I think about how draining the process of earning the degree was for me.  I sometimes now look back and wonder just how in the heck I managed, and whether or not I'd be able to do that again.  That's not a happy thought.

The silver lining:  I actually did it.  And did it very well.  There have been a few times when I've walked past my diploma and thought to myself "you've done well".  Maybe over time the "tired muscle memory" will fade.

2.  Sometimes the view really is worth the hike.
Especially when that hike is in Scandinavia. 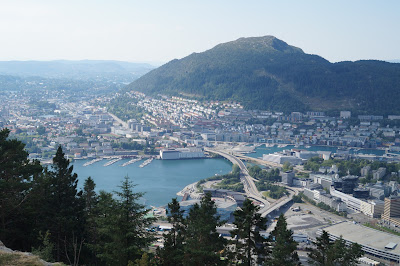 3.  We are all fully human.
All of us struggle.  I've experienced co-workers and family members struggle with stress and anxiety in 2018, more so than in prior years.  In fact, from a professional perspective, I don't ever recall seeing so many co-workers feeling so stressed in all of my working life.  There is no immunity for me when it comes to working struggles either, and as I reflect on the year, I've come to the conclusion that all of this may be for a reason.  Maybe 2018 is the ending act of something that started on October 13, 2016, for me (see THIS posting), a closing of a chapter that has to occur before a new chapter can begin.  Maybe this a transition time, a kind bridge between old and new lands.  Time will tell.

For my co-workers and family that are struggling at the moment, well, I know better days await them.  We all just need to keep moving forward, and remember the advice of the world's most famous fictional boxer:


There's also never any shame in asking for HELP.

4.  Progress comes, but sometimes at a cost.
Smoking has been a big topic in the news this year, and there is really good "news":  The adult rate of smoking in the United States has continued to decrease, and I hope that it continues to drop.  Look, I realize that we all make bad choices, but those choices shouldn't result in a long, painful death (from, for example, lung cancer). 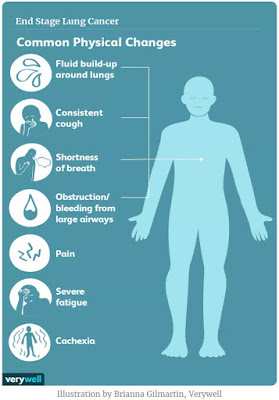 Dying of lung cancer is a horrible, horrible thing.  No one should have to experience such a thing, especially when it is the result of a personal choice...a choice that, in fact, has no real value.

Simply put, I really and truly wish that no one smoked.  While smoking rates have declined, 2018 saw the rise of a disturbing trend:  The surging use of electronic cigarettes and related devices among teenagers. 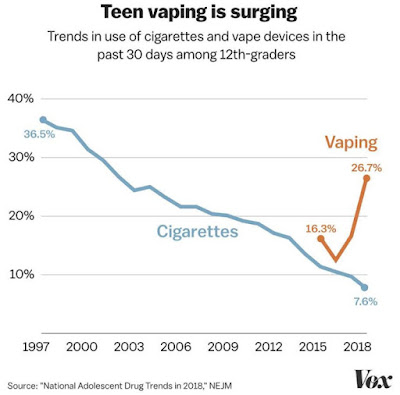 (From THIS article on Vox)

There is nothing redeeming about the use of nicotine, and while vaping is likely less damaging than smoking, it's just a higher tech way of addiction maintenance.  To me, it seems like a poor trade-off.

If you smoke, please stop.  If you vape, please at least wean yourself off of nicotine, which really is nothing more than a poison that also gets you high.

5.  My world got bigger.
See above; I don't think you can travel internationally and not be positively impacted by the experience.  In 2018 I got to visit the following countries:
The phrase "life-changing" doesn't give it justice.  You can read about my travels in a series of postings that start with THIS one.  Where do I go from here?  Well, likely we will be going to Scotland, maybe in 2020.  We shall see.  I wouldn't rule out a return trip to Norway or Sweden either.

6.  The negativity is like a toxic fog.
There is a kind of general negativity in the United States today that's unlike anything I've ever experienced before.  I'm not going to soil this blog by talking about national politics, but I will say this:  The country would be better served if the President of the United States simply stopped tweeting.

7.  Some take "servant" out of "public servants".
Some folks who are, in theory, public servants don't seem to understand what the combination of those two words actually means.  Nowhere is that truer than in the Scranton School District (SSD).  Case in point was the ridiculous decision on the part of the SSD Board to eliminate all of the district's librarians.  I wrote about this, and my recollections of Mrs. Golden, in THIS posting.  I'll note this for the record:  The SSD Board is grossly incompetent. While I don't wish to create any bad juju, I do hope that, at some point in 2019, the board is disbanded, the state Department of Education takes over, and at least some Directors are indicted on corruption charges.

A more current view of the SSD Board's latest foray into incompetent can be found HERE.

8.  The goodbyes may be coming more frequently.

The Bon Ton department store chain closed for good in 2018.  Before the final death knell, many of the chain's stores were closed, including one that I worked at up until 1988.  You can read about that experience HERE, and read about the final closing for the entire chain HERE.  When you get older, these kinds of transitions become more and more common.  To be blunt, you simply outlive people and things that have been a part of your life.

9.  The emperor truly had no clothes.
The phrase "the wheels came off the bus" tends to be over-used, but I can think of few instances where it wasn't any truer than in the sexual abuse crisis facing the Catholic Church.  It wrote about that in THIS posting.  No one should be taking any glee out of the situation facing the Church, although there is something of a silver lining to the crisis in that even the most fervently conservative Catholics are now actively talking about how lay people need to take a larger leadership role in the Church.  That's a good thing and long overdue.

There is a problem with the notion of larger lay participation in the Church though, in that the leadership (alone) of the Church gets to make up all of the rules.  And arbitrarily change the rules if it wants.  It truly is a case of a trial where the same person is the defendant, prosecutor, defense attorney, judge, and jury.  Call me skeptical when it comes to most Church reforms, which is truly sad given the many wonderful religious I have met in my lifetime.

10. Some things you just don't get over.
THIS posting.  Part of me feels, well, stupid.  I should just stop thinking about my brother Chris and just "get over it".  Another part of me, the smarter part of me (I think) knows that I wouldn't tell anyone else in a similar circumstance the same thing.  So, I'm not "getting over it".  I've given myself permission to embrace the grief.

Created By Stephen Albert at 11:41 AM