Back in the 70's, I attended James Madison Elementary School in Scranton.  I don't remember many of my teachers from way back then, but I do remember Mrs. Golden.  She was the librarian of the school, and she happened to notice that young Steve kept reading the same old book over and over again.  The book, by the way, was about space exploration.

Fast forward a few years and James Madison Elementary School was turning into East Scranton Intermediate School.  It seems that the much older intermediate school kids apparently didn't have much need for old books about space exploration, so the library was being prepared for "bigger kid" customers.  Just as the school year...the last for James Madison Elementary School...was about to end, I was called down to the library by Mrs. Golden.  She presented me with that old book about space exploration.  My love affair with books has continued ever since. 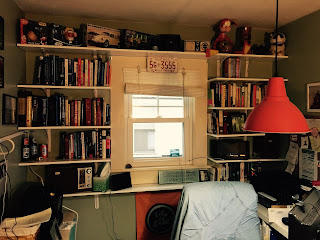 (My home office...just a few of my many books)

I mention this story because the Scranton School Board, in its infinite wisdom, believes that librarians aren't important.  I beg to differ.  I've written about the incredible ineptitude of the Scranton School Board before, so there's no sense repeating myself.  What I will offer is this:  The notion that every discretionary thing that could be cut from the Scranton School District's budget BEFORE coming to this point where librarians are let go is falsehood of epic proportions.  Simply put, they went after librarians because, among other things, they lack the foresight and guts to make significant cuts in sports programs (which, unlike the library, only serve a very small portion of students) and other things, such as a bloated administrative payroll.

I'll leave you something my daughter Katrina wrote and posted on Facebook.  #ProudDad

“You don’t have to burn books to destroy a culture. Just get people to stop reading them.” -Ray Bradbury
When a school district decides that funding sports programs, inflated salaries for upper administration, and hiring friends for kick-backs takes precedence over libraries and fostering a love of reading, there is something incredibly wrong.
As a teacher, I am terrified that a district could and would make a decision that is so detrimental to all parties involved.
As a former resident of Scranton, I am ashamed that my city would allow for this to happen. I know Scranton is not perfect, but I always thought (or hoped) that in the end, my home would have the integrity and decency to do the right thing.
As a product of the Scranton School District, I am saddened that thousands of students will not be given the basic educational opportunities that, in the United States of America, should be a damn RIGHT.
And finally, as the daughter of a school librarian in the Scranton School District, I am absolutely heartbroken.
I have witnessed my mother dedicate her life to the students of the SSD. She has given of herself tirelessly and selflessly in the form of time, money, resources, passion, and love. Hell, I grew up believing that it was normal for teachers to purchase Halloween costumes for the students whose parents couldn’t afford them because that’s just the kind of person my mother is. As a librarian she has increased her school’s collection of books so that students of all abilities and interests can love reading. She has single-handedly executed fundraisers to get new books. She’s worked with classes to create their own stories and then had them bound into hardcover books for each student. She’s created a school newspaper so students can experience the thrill the importance of reading and writing. My mother has brought in guest speakers, hosted a summer program so students could acquire books over the break, and created reading incentives that fostered a love of reading in hundreds of students.
If you think that I am passionate about teaching and my students, please understand that I am only a fraction of the educator that my mother is and know my desire to help students is fueled by the impact I have seen my mother have on everyone she has ever taught.
As a middle schooler, I watched my mother fight for years to acquire a permanent position within the SSD due to the corrupt hiring practices where friends and family are given preference over the most qualified educators. Now, after 16.75 years of full-time employment with the district, and 3.25 years from retirement, my mother received notice that her position as school librarian is being eliminated.
To say that the Scranton School District is making a horrible mistake is an understatement. The fact that the district ended up in this situation is negligence at best— but the decision to solve a budget crisis in this way is criminal.
Ultimately, the amazing educators who are being laid off will persevere. However, it is the students of the City of Scranton who will be damaged most by this decision. These students are the individuals who will grow up to decide the future of the city, our nation, and our world, but the Scranton School Board has decided that our students are not worth the investment. The school board has decided that maintaining the status quo of corrupt politics is more important than providing the youth of Scranton with a well-rounded education.
Created By Stephen Albert at 9:49 PM