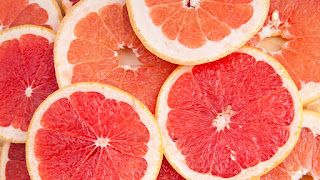 I love grapefruit, which may come as a surprise to some, given the fact that I have the eating habits of a five-year-old.  Grapefruit though was something I grew up eating.  For the young Albert boys, it was bordering on an exotic fruit, given the limited food options (based on my mother's sensibilities) we had growing up.  With the previous three sentences noted, the last grapefruit I had was in early 2016.

It was in January of 2016 that I was diagnosed with a medical condition that necessitated my taking a medication that interacts poorly with grapefruit.  To the uninitiated, the seemingly kind and gentle grapefruit interacts with a ton of medications.  Don't believe me?  Check out THIS LIST.  It's kind of like discovering that your kind and gentle Uncle actually works for the CIA, interrogating suspected terrorists, or something along those lines.  I never had an uncle like that, but I have definitely missed eating (red) grapefruit.

Jumping back to the present day, actually this past Wednesday to be exact, I was feeling normal.  As in fine.  Outside of a challenging early afternoon phone conversation, the day was even going remarkably okay.  By later on in the work day, well, I started to feel a bit off.  What transpired next isn't suitable for my PG-rated blog, but here's a good-but-sufficiently-nebulous description for you:  "My body + Wes Craven Horror Movie".  At this point, I have to give my doctor's office, at Geisinger Mount Pleasant, tons of well-deserved credit:  I called the office and they were extraordinarily helpful, postulating on what likely was happening and providing good advice.  They also got me in to see my primary care physician the next day, which is nothing short of a small miracle in this day and age.  Two sets of blood tests and a doctor visit later and the jury is still somewhat out in terms of what is actually going on within my entrails, but I can gladly report that I feel fine.  More tests are likely needed, and I've run out of arms from which to draw blood, but I'm sure the good folks at Geisinger will figure that part out.

There is a silver lining to all of this:  I can eat grapefruit again, I think.  The medication that apparently offended the grapefruit gods has been removed from my daily intake, as it was making what happened above (i.e. Wes Craven Horror Movie) a lot worse.  The replacement medication I will be taking gets along much better with grapefruit. 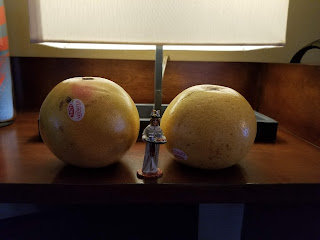 Friday was a day off, and outside of my doctor checking in with me, I spent the day shopping with Ms. Rivers.  Our final stop?  The grocery store.  I bought two grapefruits.

Created By Stephen Albert at 3:59 PM

Email ThisBlogThis!Share to TwitterShare to FacebookShare to Pinterest
Labels: Health, Me