My Brother, the Veteran 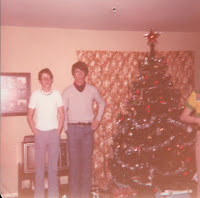 (Chris and Steve, somewhere in the late 70's)

In the year before he passed away, my younger brother Chris would occasionally tell me about some of his experiences serving in the United States Navy.  He was a "Hospital Corpsman"(1), serving at Norfolk, Virginia, and Camp Lejeune, North Carolina(2).  These were never pleasant conversations.  Now I'm not sure what role medication(3) played in these conversations, but I always did my best to listen to Chris, because clearly, there were things he experienced that deeply troubled him.  For the record, I'm not going to comment on what he told me, mostly because that doesn't really matter in the context of this story.  What does matter is the fact the served and that service changed him.

As I've noted several times over the years, I did not serve in the military.  That was, in sense, an example of privilege on my part.  Now we like to talk in this country about the "privilege" of military service, but I think that's a misplaced sentiment.  I didn't have to serve precisely because so many in the United States, like my brother Chris, voluntarily served.  They paid a debt so that the rest of us didn't have to.  More than anything else, that's what I think Veterans Day is really all about: Some small repayment towards a debt that will forever be outstanding.

Now we all make big decisions in life, decisions that change us at some basic level.  Sometimes those decisions are more a function of a default than anything else(4).  Sometimes those decisions are really and truly a matter of choice.  My brother Chris' service in the United States Navy was truly a matter of choice.  He simply did not have to serve in the military, but I don't think he knew what else he could or should do after graduating from high school.  He was also desperate to get out in the world, to see what was beyond the confines of Scranton, Pennsylvania.  Granted that the stories of debauchery, as told to him by the Navy recruiter, probably helped Chris make the decision.  Regardless of the motivation though, the two things that Chris was the proudest of in his life was his daughter Miranda and his service in the United States Navy.

Back to the subject of service and change.  The first time I saw Chris after he joined the Navy he was truly a changed man.  I envied him.  He was confident.  His life was together.  I think that he found the discipline of military life beneficial.  While Chris was a smart guy, prior to his military service he was wildly undisciplined, which caused tremendous tension between him and our mother (someone who valued discipline over about just about everything else).  That tension never really disappeared throughout his life though.  I think that the military also gave him a kind of purpose in life that, outside of being a father, he never seemed to have again.  More than anything else though, I think that Chris' military service gave him an identity that he carried forward to the end of this life. 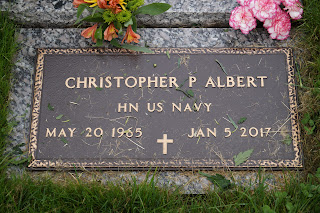 I am glad that his identity as a veteran is a part of this final resting place.

(1) I always thought it was "Med Corpsman", but the Internet seems to disagree; citation HERE.
(2) In support of the United States Marine Corps.
(3) Prescribed or otherwise.
(4) "If you choose not to decide, you still have made a choice" - Rush

Created By Stephen Albert at 2:20 PM