In years past, upon retirement, a (former) employee would get a gold watch as a parting gift.  Perhaps it was a way to symbolically acknowledge the significant time people put into their careers.  A fitting custom in my mind.

What does any of the above have to do with me?  Plenty actually.  For those who aren't paying attention (and I can't blame you for that), I was retired by my former employer after almost 28 years of service, with my last day as an official employee being December 12, 2016.  To call the process of becoming retired easy, well, that would be a lie.  It's been pretty tough on me, and I'm not one to readily admit much of anything when it comes to such things.  In the months since I left the office there were many long drives, many "what if ______" thoughts running through my head, many times when I would literally sit and yell at my computer screen (mostly because it, unlike my cats, didn't seem to take the yelling personally).

Yes, as a "retiree", and based upon my years of service, I was entitled to receive a retirement gift from my former employer.  I was given an on-line catalog of things to review, including such choices as...

...a mountain bike (no thanks, I have a very good one already)
...a set of power tools (I already have more than I need...seriously)
...golf clubs (only if my wife and I were both really retiring together)
...a village full of Lladro figurines (I'm a guy....)
...a telescope (I'd use it once and then it would sit in a closet for 15 years)
...a metrosexual messenger bag (I have a half dozen ways to carry a laptop already)

...and then where was a watch.

I used to wear a watch all the time, by the way, but then came more health concerns and I ditched the Timex for a Fitbit HR.  Certainly functional, but it also kinda looks like something that a convict on work-release would be wearing.  I also have managed to bang it up quite a bit over the past year, to the point where it looks about five times older than it really is.  Not especially classy. 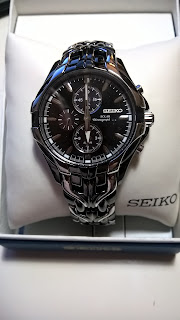 So I picked a watch as my retirement gift.  It's heavy, fancy, solar and it has little dials that I can't particularly read anyway.  That was two weeks or so ago, and the watch has been sitting in my office, on its own little watch pillow, waiting to be used.  More specifically, I promised myself that the fancy retirement watch would stay on its fancy little watch pillow until such time as I got myself un-retired from the workforce.  Put another way, I'd only wear it if I had a job to wear it to.  And I'll be putting it on tomorrow.

Before I go further, I'll note (probably again, for the Nth time) that I don't especially believe in the notion of "fate".  I also don't believe in ghosts, the supernatural, bigfoot, that the Patriots are completely innocent of all cheating charges, or that Roman Polanski is anything but a child-molester.  But events have certainly given me pause (not about the Patriots or Roman Polanski though).

Going back a few weeks, I noted in this space that I found my younger brother after he had passed away.  I likely wouldn't have done that if I were at a new job at that time.  It was almost as if I need to be available to find him so that my older brother or his wife wouldn't be the one's who did.  A man of greater faith than I would likely say that was an act of fate...for faith..or some kind of intervention that is beyond my cosmic pay-grade.  Add to that list the fact that my new career adventure really didn't materialize in a meaningful way until the Monday after my brother's funeral Mass.  It was as if I needed to finish that work before the new work could begin.

I'll note with some pride that, during my last round of job interviews, I wore a tie that had previously belonged to my brother.  Like so many around me during this "retirement" period, Chris (the brother, not the wife) had far more faith in me than I did in myself.  He knew...heck, he told me outright, several times before he passed...that I would land on my feet and that everything would be okay.

My brother Chris was not alone in the faith-in-me department.

Throughout this period, I've had a cadre of people who have listened to me, provided me with sound advice, made me laugh when I didn't want to, coached me, and, like my brother Chris, filled my faith bucket when I had nothing left to add to it myself.  Jean, Luke, Connie, Allan, Robin, Rich, Leslie, and others (for those I have not named I do apologize...you are not forgotten) have helped me more than I could ever possibly and rightfully acknowledge.  There literally was a "Team Steve", with the CEO being my wife.

Looking back over these past few weeks and months, three things stand out for me:
Looking ahead, I have new colleagues to meet, new challenges to be overcome, and a new watch to wear.

Created By Stephen Albert at 6:13 PM

Email ThisBlogThis!Share to TwitterShare to FacebookShare to Pinterest
Labels: Family, Me (Professional), Me. Deep Thoughts, Religion

I have been there. It's not fun. Good luck with the new job.
--Andy Palumbo

Hang in there Steve, you got this.

Thank you Michelle...I really appreciate it!