Most of my walls are now empty.  It's actually disconcerting, in an odd sort of way.  Gone is the Italian print of a Space:1999 Eagle.  Gone is the Back to the Future movie poster.  Gone are the two framed John Lennon posters.  Ditto the Rat Pack (that my daughters gave me for Christmas, many years ago).  Gone is the decorative steel American flag.  In fact it is all gone, except for two things:

All of my other large wall hangings are now safely in a sortage building.

I have kept three framed pictures:  one of Ms Rivers and I, and two of my daughters.  All the rest are boxed and awaiting a resting place in the above referenced 5x10 storage area.

Also gone?  An audio cabinet.  A cabinet for holding CDs & DVDs (all of which are boxed now).  A bookshelf.  Most of what's left consists of boxes are that are going into storage or elements that will help make up my minimalist existence for the next few months.  I am allowing myself to keep the bare essentials:  Two TVs, desk, BlueRay player, stereo system, and a filing cabinet.  Some of what's here will be sold, including some book shelves, a table and chairs and various other things.  The underlying idea behind all of this is to make the place as appealing as possible to a potential buyer.  Let's hope it works.

I never quite knew how my life here on Elba would end.  I'd like to say that it "seems like only yesterday when I moved in", but that would be a lie because October 2010 was almost a lifetime ago.  At least on the angst scale.  I moved in here a wreck, all in two days I'll add.  I'm moving out at some date to be determined  that only God knows, a thoroughly different person.  Hopefully a better person.  Not quite Six Million Dollar man better, but better never the less. Oh, and I also have a cat.  He seems to be handling all the moving and such rather well (he is now snoozing against my keyboard as I type this).

I do have more stuff than I realized.  And I'm disposing of more than I realized.  Some has been donated. Some has been or will be thrown out.  Some will be sold.  I really don't need the money from any stuff sold, so the proceeds of anything that involves substantial cash, say over and above a good dinner at the Olive Garden, will be given to my brother Joe.

By the way, the title of this post, "Empty Walls"...in addition to being a factually correct description...is also a sort of hat tip to John Lennon's terrific album Walls and Bridges. 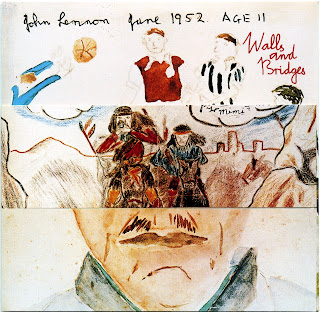 In addition to the reference to "walls", the Lennon album was recorded during his infamous lost weekend.  You can read more about it HERE.  I wouldn't describe my time here as being a lost weekend, but it has been a transition from my past to my future.  The analogy works for me.  Here's what also works from me, also from the Walls and Bridges album...

Created By Stephen Albert at 8:40 PM