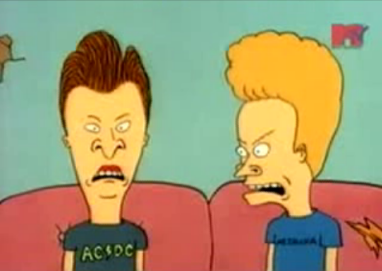 I was talking to someone the other day about Beavis and Butthead. They thought it was juvenile and stupid, I think it was a work of genius.

Why? It's actually pretty simple: the cartoon wasn't endorsing stupid behavior (such as Frog Baseball)...it was making fun of it. It's a parody of teenagers, not a documentary. It's as if the creator, Mike Judge, was able to distill every stupid thought ever held by every teenage boy and somehow concentrate the sum total of it all into two morons. Genius.
Created By Stephen Albert at 8:45 PM

Email ThisBlogThis!Share to TwitterShare to FacebookShare to Pinterest
Labels: Humor