In NEPA we have Blogfest and BlogCon.  I know some folks who work hard on both events, and I've actually attended Blogfest a time or two. 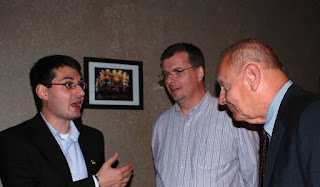 (Blogfest 2010:  One of Mary Borthwick's sons, me, and a former Congressman; photo credit to Joe Valenti)

I've never been to BlogCon though, despite the fact that I actually think I write more than most other bloggers in NEPA.  A notable exception would be that over-achiever Andy Palumbo, but in all fairness, I think his postings that just have train pictures shouldn't count.

Anyway, and in complete honesty, I feel like I'm too old for BlogCon.  That's not a knock against the event, as I know that the topics are well thought-out.  However, I'm not interested in monetizing my blog and I don't really care about SEO (I barely know what SEO actually is*).  Should, by the way, I actually care about SEO?  It certainly sounds like very serious stuff, the kind of thing that younger types ponder as the sit and drink Pabst Blue Ribbon while simultaneously listening to Arcade Fire.

The above is actually far more about my insecurities as an audience member than anything else.  Words can not describe how incredibly uncomfortable I would feel sitting in a classroom during a blogging event surrounded by people younger than my oldest daughter.  My thought bubble imagines someone sitting next to me thinking "why's the old guy here?  At his age shouldn't he already know about SEO?".

Anyway, you can link to BlogCon HERE.  Note that the proceeds from BlogCon go to help fund a very worthy endeavor for local girls, SO PLEASE DO SUPPORT IT.

A close second on the uncomfortable scale for me is usually my attendance at Blogfest.  I don't mingle well, that is unless I'm doing it professionally (I stink at it then too, but at least I know I'm getting paid...).  Then there are the politicians, most of whom I don't really know.  That leads to the inevitable awkward conversation about me and my blog, where the politician tries to figure out if I'm worth spending time with; the answer is, by the way, NO.  Granted (and as previously noted), I have actually attended Blogfest though, which at least shows that I'm willing to try and engage in cross-human interactions every once in a while.  As for Blogfest 2017, well, I'm not sure.

I'd link to Blogfest as well, but there isn't a page for it yet.