Vermontesque #2 - You're My Best Friend

Friday morning and I'm typing this while Ms. Rivers is still sound asleep.  She firmly believes in the "you can catch up on sleep" myth, mainly because she goes to bed late during the week and gets up early to get some professional work done before the crack of dawn.  Me?  I mostly just hate sleeping.  Anyway, after our long bike trek yesterday, along with plenty of walking, she's entitled.

Thinking about Thursday, one odd thing stuck in my head:  We were taking a break from our bike ride, sitting in a nice lake-side park, watching water and people walking/biking by.  A rather scruffy young man was biking by, complete with scraggly hair, no shirt, ratty shorts, etc.  He was blasting music as he peddled along.  What was he playing?  Nine Inch Nails (make that "Noine Inch Nails" for all you Howard Stern fans out there)?  Rage Against the Machine?  Arcade Fire (just kidding...no one really listens to Arcade Fire)?  Nope; it was "You're My Best Friend" by Queen.  I kid you not.


That's probably the most Vermont thing I've seen/heard so far.

Saturday morning and it's just about time for packing up and shipping out.  I had every intention of finishing this posting last night, but I was simply too tired.  Speaking of yesterday, the day was spent at the Ben & Jerry's ice cream plant, wandering around an outdoor mall in Burlington, and a sunset (make that "cloudset" in our case) sailing cruise on Lake Champlain.  A splendid time was guaranteed for all, and by and large, it delivered. 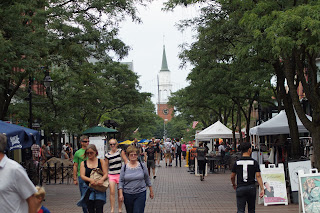 Lastly, if you're in the Burlington area, you should check out the Whistling Man Schooner Company, which was the boat we sailed on Friday evening.  Beautiful boat, a nice cruise, and an informative captain.  Highly recommended.

Created By Stephen Albert at 8:58 AM