It's said that John Wilkes Booth, as he emerged from a burning barn (after also having been shot by Union soldiers) looked at his hands and said "useless, useless"*.

I've always been fascinated by that quote, and lately, well, I've been thinking about it more than usual.

Why?  Well, I think it's just a part of the fact that it's been a difficult year.  Now I have gotten recognized over the years by friends and co-workers for my ability to (mostly) remain calm and collected in difficult situations, but there's a reason why that's the case:  I didn't grow up in an environment that encouraged emotional expression.  So you see, (mostly) being calm and collected is relatively easy for me.  Like many seeming "strengths" though, it comes at a cost.

The truth is that I'm not good at expressing most emotions.

Now with the above, I know that I join the ranks of about 98.6% of all men, but this is more than just trying to meet a social norm.  Growing up, there was a kind of punishment of sorts associated with being anything outside of a basic okay.  I think for my mother, it was everything she could do to keep the ship afloat, so anything that might rock that ship, anything that distracted from the mission of just getting through things, was strongly discouraged.  On one level I understand that; on another level, well, I'm am both appalled and confused.

As a parent myself, the appalled part is readily apparent to me, and I'll note that having three daughters greatly helped in that department.  They simply never would have allowed me to get away with the "everything must be okay or else" manifesto.  In a way, the students were the teacher.  Children have an absolute right to feel a wide range of emotions and have those emotions acknowledged.  Now I was not a perfect parent, and I failed on many occasions as a father, but emotional suppression for my own benefit and/or convenience wasn't among my sins.

Confusion over my own emotional expression has a kind of radioactive half-life that I continue to unpack, a third of the way into my 50s.  Yes, I do get angry, but I also almost always feel a great deal of guilt over that anger immediately after the fact.  On the other end of the spectrum, I'm sometimes afraid to feel joy, as to me it feels like a kind of gaseous thing that, once uncorked, would dissipate, never to return.  In between the two, a calm demeanor hides sometimes more wide swings inside my head that I don't normally cop to, but since I'm already in the hole with this posting, I might as well be all the way in the hole.  No sense doing this self-expression thing half-assed.

N.B.:  This is, in part, why this whole blog thing has existed for so long, namely that I have plenty of things in my head.

So where to go from here?  I know I need to work on this stuff.  Heck, I've known I need to work on this stuff for a very long time.  And I'm trying**.  I can't say with a whole lot of certainty that I expect any success from my efforts, and despite what I've noted here on so many prior occasions, this is one instance where there should be a kind of destination (as opposed to just the journey itself).  However, I'm going to keep on trying.  Maybe I'm simply hoping for a kind of self-help version of the "Golden BB".  Maybe all of this has happened before*** and will happen again.

Maybe I should simply write more about politics.  Or cats. 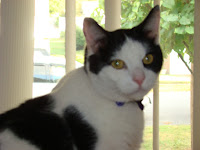 (**) I've actually read quite a bit about this topic in the past, and I am currently reading Running on Empty by Dr. Jonice Webb.

(***) After having written about 75% of this posting, I checked and discovered that I've actually posted on this topic...using this same title...before, in 2009.  See HERE.  That's probably not the first time this has happened before (see above), but it's also okay,  I think it a adds a kind of veracity to the posting.

Created By Stephen Albert at 8:24 AM