You can read it HERE.

In this particular posting, Mr. Palumbo (Side note:  I'm 53 years old, so at what point can I stop calling other men "Mister"?  Still, "Andy" sounds so familiar...but so I digress.) shares another blog posting that talks about, well, blogs and blog posting from the perspective of another reporter.  So what's so special from my perspective?  Well, here's one of the several points made in the posting that I wholeheartedly agree with:

"So like I said, my blog is more for me than it is for my readers. Because, to be honest, I don't know if I actually have any in the first place."

"So there you go. Now whether sixty people read this or six, it doesn't matter a bit to me. I don't generally write for anyone but myself. Now that might sound selfish, but so be it. As someone who at least tries to do for others (as a husband, father, friend, etc.), I think I'm entitled to at least this much of a selfish indulgence."

A bit of affirmation is good for the soul.

Speaking of goodness and affirmation, in about an hour or so a three or so day vacation to Vermont is about to commence.  I'm looking forward to it, if for no other reason than the fact that I can use a bit of rest.  Camera and laptop will be in tow, along with a new book on the Protestant Reformation (a bit of "light" reading). 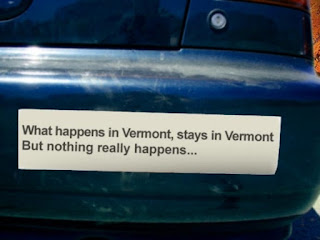 Created By Stephen Albert at 9:38 AM

Email ThisBlogThis!Share to TwitterShare to FacebookShare to Pinterest
Labels: Blogs/Internet, Me, Media