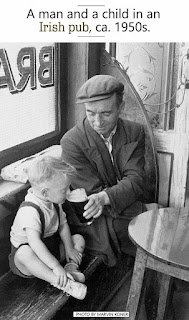 I saw this photograph online somewhere and immediately had to grab it.  It was, shall we say, evocative.

One of the few memories I have of spending time with my father as a young child was at a bar.  I don't know the year, but 1968 will do just fine.  The bar itself was in downtown Scranton, maybe on Adams Avenue.  I don't remember too many other specifics, but one thing has stuck with me nearly a half a century later:  The smell.

The smell was of beer, and cigarettes, and maybe some urine thrown in for good measure.  It was a stale, almost heavy smell.  Like an invisible fog of stink.

Fast forward almost 50 years and I readily confess to not liking bars, as manifest by the fact that I've been to them recreationally (that is not for a specific event or gathering) less than a dozen times as an adult.

In retrospect, it just seemed all wrong.  Not the trip to the bar itself all those years ago, but more so the totality of the whole thing.  That memory has a kind of despair associated with it.  Related to that, I could never understand my late brother's consumption of alcohol, but maybe that's because he didn't have that experience back all those years ago.  Granted, I will confess to periods of time in my life when I did drink, but for the most part, I have abstained.  The short and easy answer to the question of "why" is that I don't like how it (booze) makes me feel; the better answer is that the thought of drinking (especially beer) mentally brings me down a path that seems to always land back at that bar circa 1968, back to that smell.  Back to a kind of despair that I can't quite describe, but yet somehow understand never the less.

Created By Stephen Albert at 11:10 PM