Greetings from Vermont, which, I am told, is actually one of the least diverse states in the Union.  So far I've seen little evidence to refute that idea.

At the moment I'm sitting in a Courtyard by Marriott hotel room, waiting for the day's events to begin.  Those events include a maritime museum and bike riding along Lake Champlain.  Getting here yesterday was on the long side...something like six hours of highway and country road driving...but that's the cost of admission whenever you want to go some place and you have the attention span of a gnat.

Speaking of yesterday, it was another day for me of feeling exhausted.  This at least partially relates back to my case of "Chicken Pops, Part Deux", with the added self-inflicted wound of my having stayed up very late the night before working on something.  Late, as in 1:30 am.  Not sure if that was worth the effort, but we shall see.  Anyway, I know I wasn't the greatest of company, but fortunately, Ms. Rivers is understanding (in addition to being smart and beautiful).

Fast forward to 9:30 pm, and it's been a busy day.  Like most Albert-Rivers vacation days, it's been pretty busy.  Among other things, we logged about 15 miles of bike riding along Lake Champlain.  Dinner was some wonderful Asian bistro...whatever that actually means, other than Mongolian beef I had and the curry shrimp that Ms. River had (which apparently was pretty spicy).  One would think that by now I'd be tired, but for whatever reason, it's now "second wind" time. 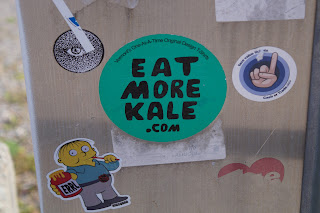 If it weren't for the 10-degree average low in January and the previously mentioned 70+ inches of snow this might a great place to retire.

As for tomorrow, well we have some wandering around time planned in Burlington, the Ben and Jerry's ice cream tour, and a twilight cruise on Lake Champlain.  A splendid time is guaranteed for all.

Ten years ago I couldn't have imagined being where I am now, namely thinking back over a day of detachment and relaxation in Vermont.  I suspect there's a larger lesson in that last statement, some ground that I've already covered here before:  Each of us, all of us, have a shot at redemption.

Created By Stephen Albert at 10:15 PM