This is worth your time to read if you even have a passing interest in organized religion.

“Our God is a God who is close, who accompanies. Fundamentalists keep God away from accompanying his people, they divert their minds from him and transform him into an ideology. So in the name of this ideological god, they kill, they attack, destroy, slander. Practically speaking, they transform that God into a Baal, an idol,”

“No religion is immune from its own fundamentalisms,”

“In every religion there will be a small group of fundamentalists whose work is to destroy for the sake of an idea, and not reality. And reality is superior to ideas.”

He also made a comment about those religious fundamentalists who take a legalistic approach to their ministry:

“When a priest isolates himself, in his solemn or legalistic posture, or in the posture of a prince … when he distances himself, he embodies in a certain way those persons to whom Jesus dedicates the whole of chapter 23 of the Gospel of Matthew. … Those legalists, Pharisees, Sadducees, doctors of the law that feel themselves among the pure.”

One has to wonder if he was talking about, among others, Cardinal Raymond Leo Burke. 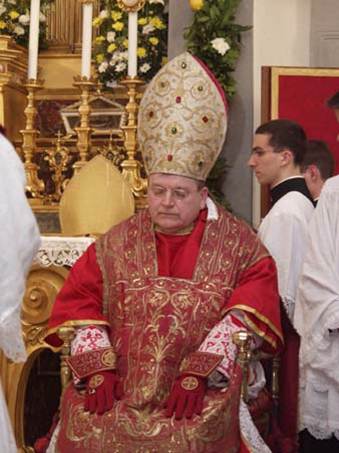 (From a wonderful blog that all Roman Catholics should be reading.)

For the record, the gloves Cardinal Burke is wearing in the picture above cost more than what I spent of my first two cars...combined.  The hat?  That costs more than twice the value of the first car I ever financed.


Created By Stephen Albert at 7:09 AM