Not Ceasing to Explore (Marigolds and such)

It occurred to me that, when I named the blog (back in 2008), the title might imply a desire to explore the world around me.  That may, in fact, be the intent of the quote by T.S. Eliot.  As for me though, I've never really thought about "exploration" in the context of travel.

Growing up we didn't really travel.  In fact, I can only remember traveling to two places:  South Central Pennsylvania to visit with relatives of my mother and to Atlantic City (twice, maybe...pre-gambling days) on vacation.  Not exactly globe-trotting.

Those family visits seem, to this very day, surreal.  I don't think my mother actually got along all that well with the rest of her family, a point which she later made quite directly on numerous occasions.  I've since learned life lessons around the value that family brings from a support system perspective, but that simply wasn't part of the experience I had growing up.  We were, that is my immediate family unit, pretty much an island among ourselves.

My Mom's family were different people.  They spoke differently ("Couke" for "Coke"...as in the carbonated soft drink), went to a different kind of church and had nice houses.  I don't know if they all actually had nice houses, but those that I remember were nice.  It's important to remember that the idea of "nice" is relative though; they seemed like palaces by my perspective then, but now they were simply well kept ranch homes (again, those that I actually recall).  One thing that has remained with me though are Marigolds. 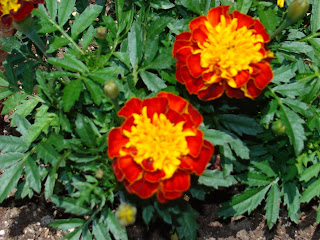 Ah, Marigolds.  My favorite flower.  Rumored to repel Japanese Beetles.  Claimed by some to smell like urine, but I do so love them.  That love goes back to when I was a kid and we would visit my Mom's relatives.  As noted above, they all lived in nice houses and they all had Marigolds planted in front of their homes.  To this very day I associate Marigolds with nice homes, and ever since I've owned a home I've always planted Marigolds.  It's my way, I suspect, of saying that I have a nice home too.  A kind of bizarre status symbol of sorts.

The Marigolds in front of my house are now reaching that ratty phase, where they very well may need to be pulled out and perhaps replaced by some Mums for the balance of the pre-freezing weather.  It will only be temporary though, as next Spring will come, and along with it more Marigolds.