File this under "Point Proven" 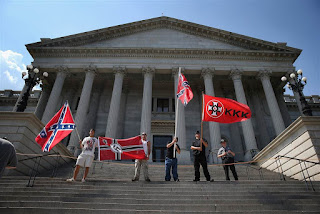 Note that it's not me this time stating that there is a moral equivalency between the Confederate battle flag and the NAZI swastika, it's some of the folks that promote the flag itself.

As I've previously noted (for example in THIS posting): 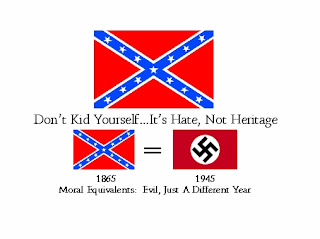 I will add this slight caveat to the discussion though:  I do think some organizations have taken the whole "ban the flag" thing a bit too far.  For example, a cable channel refusing to play re-runs of the Dukes of Hazzard because of the rag flag on the roof the the "General Lee" is silly at best.  It's just a television show.  By that logic, no re-runs of Hogan Heroes should ever be shown.  What's more, I don't want to see the flag totally banned; heck, it's a good way to identify the latent and overt racists out there, and as long as society actually acknowledges what the flag stands for, my concerns are met.

Created By Stephen Albert at 7:00 PM