I've never re-posted content here before, but recent events seem to make it a good idea.

I'll also note that this particular posting generated dozens of hate e-mails/hate comments, as well as a threat or three. 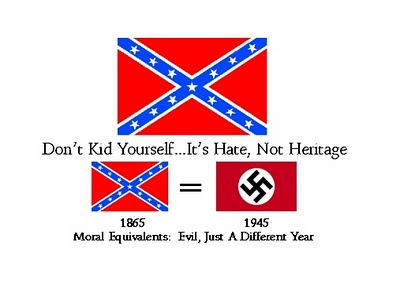 It was reported in multiple news outlets recently that Virginia Gov. Robert F. McDonnell issued a proclamation designating April as "Confederate History Month" without referencing, in any fashion, the very reason for the existence of the Confederacy in the first place: the grossly immoral institution of slavery.

Well it appears that the governor's plan went askew, as people did notice the omission and the reaction was not positive. As a result, the proclamation has been amended. See story link HERE. As quoted from the governor's office and referenced in the article:

"The failure to include any reference to slavery was a mistake, and for that I apologize to any fellow Virginian who has been offended or disappointed."

The revised proclamation has the following additional text:

(slavery) "was an evil and inhumane practice that deprived people of their God-given inalienable rights and all Virginians are thankful for its permanent eradication from our borders."

What, you think so? As I noted in a comment on NEPArtisan's blog, not referencing slavery when discussing the Confederacy is like not mentioning the Holocaust when talking about NAZI Germany. Make no mistake about it:
In the final analysis, apparently Governor McDonnell was hoping that the Revisionist History Fairy would be visiting Virginia and somehow make people forget about that little detail called "slavery" and instead have us all believe that Confederate soldiers were just a bunch of patriots who whistled Dixie as they fought to protect their farms from the "evil" federal government. Well guess again. There are few things more evil than the notion that some humans are equivalent to livestock, so there is at least some comfort here in knowing that the governor's best laid plans have gone asunder.
Created By Stephen Albert at 7:55 AM