Yesterday was the last full day we had in Quebec, and after I jot a few thoughts down it will be time to pack up and head south.  Our actual trek home will be in two parts.  Today will be spent driving to Albany, NY, and tomorrow will be the stretch from Albany to home.  It's not an impossible drive for a single day, but we both had a ton of Hilton points, so why not break it up?  Besides, we enjoyed the last time we were in Albany (a few years ago, as part of a trip to see a live broadcast of A Prairie Home Companion).

Speaking of yesterday, it was basically spent wandering, shopping, eating and we took a short cruise up the St Lawrence.  My kind of day actually:  Not overly scheduled and with time to make things up as we went along.  On the eating front, I don't know how to say this other than to just be transparent about it:  Yes, I was in Quebec City and I did in fact have pizza for both lunch and dinner.  Now in my defense, while all of the food here is exceptionally well prepared, in point of fact I am never going to eat mushrooms, cephalopods, odd cheeses, most fish or any number of other things.  I'm just not.   For the record, the lunch pizza was so-so, but the dinner pizza was outstanding.

Our short cruise was fun, although slightly marred in that while we were waiting in line to board there was a gentleman and in front of us who insisted on conducting business...stock market kind of business...loudly for us and everyone else to hear.  Working in the financial services industry, neither Ms Rivers or I wanted to hear any of it, and I am sure this man's family was none too pleased (or at least they shouldn't have been) as he only momentarily put his phone down for the boarding group photo.  Thanks Gordon Gecko, we needed that reminder of work. 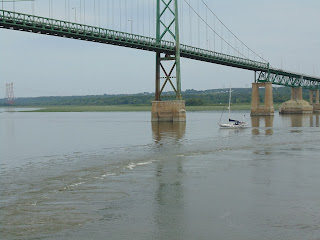 (Bridge to the Island of Orleans) 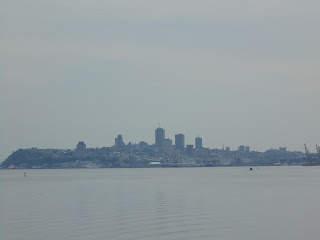 (Quebec City, from the St Lawrence, near the Island of Orleans)

Outside of Mr Gecko (and for the record, he wasn't that big of a Wall Street tycoon, at least based on what I heard), the cruise was relaxing, as was the rest of the day.

As for me, well it's time to pack.

Created By Stephen Albert at 8:25 AM