We've had the television on for a few minutes before going to bed and to get a quick check on the news.  Maybe an hour, tops.  In scanning the channels while in Quebec, naturally you discover that most of what is on is in French.  That's fair.  Except for TLC, which apparently is airing "all dwarf" programming at the moment.  Anyway, what I've found fascinating is when I see music videos of rappers working in French.

Now to back-track for a moment, my only real experience with Canadian rappers working in a foreign language was a performer named Snow, who had one well known song in the United States called "Informer".  I've always assumed that Snow was rapping in French, but when I actually looked up the lyrics for "Informer" I discovered that he's actually speaking English.  See for yourself.

Shows you what I know.

It's pretty obvious that I'm not really up on my rappers, let alone rappers who rap their rap in French.  Regardless, rapping in French seems to sound better.  Maybe it's just that the language is more fluid sounding.  Now granted that they could be rapping about killing police dogs or something horrible like that, but hey, it at least sounds good.  I suspect the same is true for those rapping in Italian out there.

Today's major jaunt was to Montmorency Falls, which is about 16 miles from Quebec City. We were rather proudly told by a tourist official that "it's 30 meters taller than Niagara Falls!", which for the under educated out there works out to about 60 feet, more or less, of extra vertical real estate.  Like most Canadian attractions, a few things were true:

The attraction for us was the walking, as we both enjoy it, and Montmorency Falls provides plenty of it. 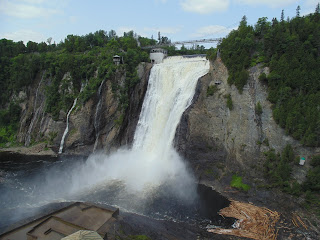 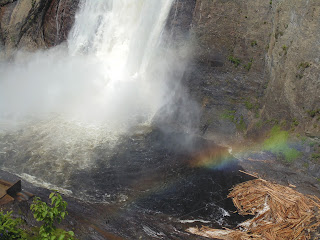 (Somewhere above the rainbow) 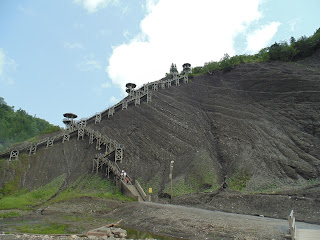 (We walked all of that...and more)

Dinner today was at the Champlain Restaurant at Le Chateau Frontenac.  A bit more fancy than what we'd normally do, but it was worth the splurge.  Dinner itself was okay, but not as good as last night's.  Did I mention there was more walking involved?

I think my tendons are going to need a vacation from my vacation.