The actual trek home began yesterday and concluded today, with the previously mentioned overnight stop in Albany, New York.  The actual drives...Quebec City to Albany and then Albany back to NEPA...were uneventful.  Both of us were glad we decided to break the trips (both up and back) into two parts, as there's just not a lot of fun to be had in 9+ hours of driving.

Speaking of fun, or more correctly the absence of it, we were lucky enough to have a reservation at the Albany Hilton the same night as a convention of Abronne devotees.  What, may you ask, is Abronne?  Well think of it as Amway, but for cosmetics.  Multilevel Marketing (MLM) at its finest.  Now normally I don't care what religion someone is, or in what other ways people want to spend their money, but the good folks at Abronne crossed a line for me early this morning, in that our hotel room was sandwiched between two groups of MLM drones that decided to carry on until about 3am.  A set of parties, if you will, without the booze, laughing or debauchery but instead focused on the intricacies of MLM.  Needless to say, I was unamused.

What was amusing?  That would be this Abronne centered blog posting by Meg the Media Maven.  Good stuff that almost made up for the sleep deprivation caused by the pyramid scheme convention.  It also reminded me of a Bloom County book I own. 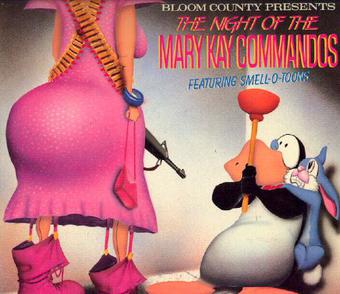 Anyway, it was nice to come home.  I missed our cats and the comfort of a daily routine.  None of that means that I failed to enjoy the trip, because it was a great time.  I could visibly feel my personal level of stress at an almost all-time low, as measured by the dual decreases of heart rate and need to pee frequently.

I also have a new found respect for the Great White North (GWN), even if I didn't exactly endear myself to all of culinary opportunities available.  As I've noted elsewhere, our friends to the north really seem like friends, and the language barrier is mostly made out of tissue paper.  In fact, outside of a roadside strawberry salesperson and a clerk at a Tim Horton's, most of the folks we met spoke better English than the typical Talkback 16 participant (sorry, I just had to pick the segment about gassing groundhogs).

Lastly, it does feel different.  The "it" is a sense of a major life accomplishment, of walking through a door to see an outside that was only previously seen from a window.  It's as if I am finally home, and that's a good feeling.
Created By Stephen Albert at 9:20 PM