Mayor Leighton...see my postings as a "substitute blogger" on NEPArtisan that chronicle Wilkes-Barre Mayor Tom Leighton's asinine hiring of his daughter and niece.  To be blunt, I thought this guy was better than this kind of stuff.  Guess I was wrong.  Speaking of all things "hayna"...

Hayna 500...I recently discovered what was once called the "Hayna 500".  Interesting stuff.  For the uneducated (or those from north/east of Avoca), this was a cruising circuit in and around Wilkes-Barre and Kingston.  Actually I just think the term "Hayna 500" is funny.  Kudos to Ms Rivers for that one.

Casey Armstrong...I do think that it is horribly tragic that a little girl is dead and an accused murder may have gotten away with the crime, but seriously, where is the uproar when any number of actually more pressing issues come up for public debate?  If half the people who followed the Armstrong case also followed, for example, developments in educational policy in this country, then I'd think there really would be a ground-swell for real change. This is, in a nutshell, what is wrong with Americans today:  we pay attention to the wrong things.

Kennedy Home Movies...I've been watching a History Channel show on the home movies of the Kennedy family.  Fascinating stuff.  It really does make you believe that the Kennedy clan was "America's Royal Family".  This was a clan full of beautiful people that had the world by the testes.  Well everyone except Rosemary.  Ouch.

Facebook Etiquette...At what point do you decide that those people you don't know really shouldn't be your "friend" on Facebook?  I do an every once in a while purge of Facebook, but I still have a few people that I don't actually know listed as a Facebook "friend".  All this modern technology does come with its challenges.

My Cat...had a few visitors today, and I have to say he was very well behaved.  Actually he is more of an attention whore than Lady Gaga, so his good behavior shouldn't have been much of a surprise.

Independence Day...a belated "Happy July 4th" to one and all. 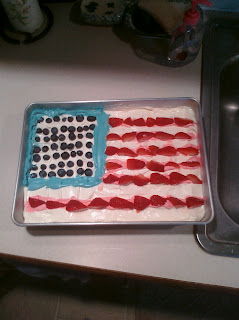 Created By Stephen Albert at 11:23 PM