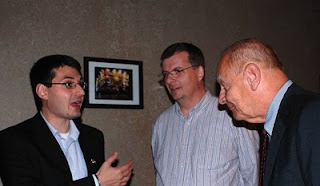 Picture...I couldn't control myself & just had to share the above picture with the proud mom of NEPA's favorite local blogger, taken at the most recent blogger/politician soiree.  Given my employers, well shall we say "displeasure" with Congressman Kanjorski, that may not have been such a good idea.  But what the hell.  For the record I hate how short my hair looks in this picture, although I've had worse pictures taken.
On the Physical Front...I've lost about 11 pounds since my last visit to the doctor in May and my blood pressure was a "not great" 140/88.  I have to go back in early November to check it again.  One of these days I'm going to walk out of there with a prescription for God-knows-what medication.
On the Mental Front...I'm dealing with some intensely stressful issues at the moment.  Like most things in life, things never go quite the way you first imagined, but that's okay.  That which does not destroy you makes you stronger, and it is at times like this when you find out who really does have your back.  [Insert your own favorite self-help/motivational quip here]
Lee Morgan...It's funny how time has the ability to change one's perspective.  Years ago I thought Lee Morgan was just another Scranton City Council crazy, you know the kind that fully enjoys the camera.  Fast forward and I now have a sign of his in my yard and I'm going to vote for the guy. You an follow Mr Morgan via Facebook HERE.

Junk...In cleaning out my attic I discovered that I have a total of 6 disemboweled computer CD drives.  I seem to collect these things like cats.  I also found a cache of old National Lampoon magazines, so the effort was not a total waste.
GOP Senate Candidate...Christine O'Donnell apparently has said just about every insane thing ever cooked up by a fertile imagination.  I even saw a video compilation of her "greatest hits". In her defense she looks like she was about 15 when the whole "monkey spanking is evil" thing came out.  Anyway,  Charles Krauthammer was right...an unelectable Tea Party member doesn't really help the GOP, and Christine O'Donnell and Sharron Angle will cost the GOP the U.S. Senate.  Mark my words:  when the dust settles, Republicans will be scratching their heads trying to figure out how Harry Reid (of all people) managed to get re-elected in this cycle.
Stickers...Am I the only one who absolutely hates the advertising stickers that the Scranton Times places on the front page from time to time?  I'm probably less inclined to buy from those institutions, as the stickers are annoyingly placed over something that I inevitably want to view.
Onorato Cloaking Device...Rumor has it that Dan Onorato has conspired with the Romulans to develop a cloaking device that allows him to be in the Scranton area without actually being seen.  That must be the case, because I follow the guy on Facebook, so I can tell you that he manages to appear at every pig roast, fire hall dance and quilting bee that happens across rural Pennsylvania.  There do not, however, appear to be many appearances here.  What gives?  Are we simply being taken for granted?  If we are, that's a mistake.  A Western Pennsylvania Democrat needs support from the cities in NEPA.  Wake up Dan.


Bob Cordaro...I briefly heard Bob Cordaro on WILK yesterday, defending all things Cordaro.  Say what you like about the guy, but one thing is for damn sure:  he has huevos the size of church-bells. Indictments aside, you have to admire a guy that looks you in the eye.

Coda...I wrote some training material a few months ago and partly out of a desire to sound different I used the word "Coda" in the copy.  Of course all my peer editors wanted it taken out, but what the hell...I had my moment of culture.  Anyway, as my "Coda"  to this post I present the late, great John Lennon...


Created By Stephen Albert at 6:41 AM