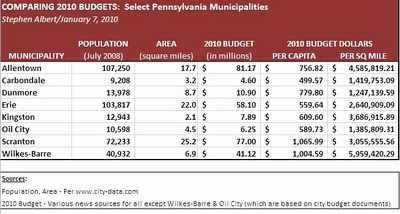 Lately I've been ragging on Dunmore for basically living beyond its means, but the thought of "well how bad are they in comparison to others" has crossed my mind, so I decided to actually try and figure that out.

Well simply looking at the total budget doesn't help, as a lot can impact what a municipality spends, so my first thought was to look at the budget of a per capita/resident basis. This seems to be a good measure for costs that are directly driven by the need for resident services (garbage collection, etc.). However it also occurred to me that some costs are more driven by the need to maintain/protect infrastructure, which got me thinking that another possible analytical slice is to measure budget dollars spent per area of the municipality. The sum of both lines of thought are noted above.

There are probably many, many more ways to compare budget amounts. What's more, there are other factors that drive budget costs as well, such as the number and size of not-for-profit & governmental institutions. These institutions use municipal services, but yet don't contribute towards municipal revenue. Scranton in particular is hampered in this regard, as noted by Director Phillips during a School Board meeting I attended a few weeks ago. I'm sure that other larger municipalities face similar challenges. Another element that I can't easily get to debt service, which is akin to what a family spends on credit card purchases...that is not an essential cost, but one never the less that has to be met. Rumor has it that Scranton has a much-higher than normal debt-service. That's something I'll have to try and look at in the future.

I had gone into this expecting that the borough of Dunmore would come out looking grossly inefficient, which isn't exactly the case. The municipality that surprised me the most was Wilkes-Barre. First, it's really not all that large, area-wise. In fact, you could fit Wilkes-Barre into Scranton several times over. With a per-capita budget nearly that of Scranton's but with far less infrastructure to maintain, Mayor Leighton's town is the one that stands out of the pack as looking inefficient.

You can come to your own conclusions about this stuff, but I did find it very interesting as I put it together.
Created By Stephen Albert at 5:11 PM