A Gift for Myself 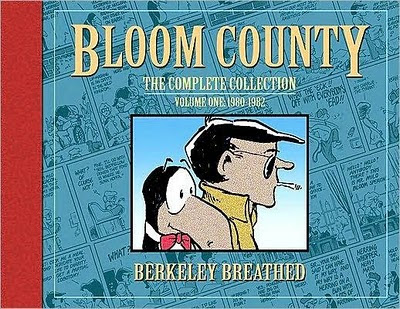 Seeing as though I've been in a little bit of a "funk" lately, I decided to buy myself a little gift. As I referenced this morning, all of the Bloom County comic strips are coming out in five volumes, with the first being recently released. After taking my mother shopping today, I decided to run up to Borders to pick up a copy.

Now what's the big deal about a comic strip anyway? After all, I'm a 45 year old man, so shouldn't I be a little bit too old for such nonsense? Well for me, Bloom County is something of a anchor to a specific time in my life. I didn't start reading the strip when it first came out in 1980, but instead found it in the local York, Pennsylvania newspaper when I got my first job out of college (circa 1986). I was probably hooked on it immediately. I loved the ever-so-slightly political tilt of the strip, the cultural references, and the characters. Hell, I even have a Bill The Cat doll (my current Facebook picture). Reading the strip was one of few stress relievers I had during a period just full of stress. As a side note, I'm not really a fan of any other comic strips although I do find the occasional Dilbert strip to be pretty funny.

So I suppose that Bloom County is as much about reminiscing as it is anything else, but so be it. Maybe that's one of the benefits (one of the few benefits...) of growing older.
Created By Stephen Albert at 8:49 PM

Email ThisBlogThis!Share to TwitterShare to FacebookShare to Pinterest
Labels: Me (Professional)