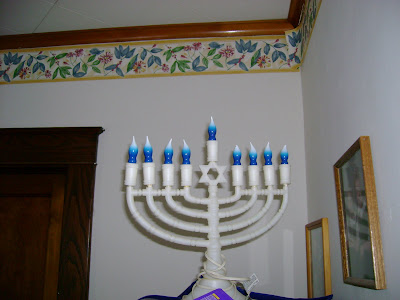 23 PUBLIC OFFICIALS IN LUZERNE COUNTY HAVE BEEN INDICTED ON VARIOUS CORRUPTION CHARGES.
That's a hell of a headline. Now given that, just what are some of the residents of Luzerne County actually protesting? Judges that send kids to work-camps in order to get kick-backs? A District Attorney who turned a blind eye to the actions of the previously noted judges? A county commissioner who was apparently ignorant as to the definition of bribery? Nope.

Yes, people are protesting the removal of a plastic Jesus from the county courthouse. Now to be fair, it's just just plastic Jesus that was removed: it was the entire Nativity scene and a Menorah. I actually like a well constructed Nativity scene. I also happen two own a plastic Menorah as well (see above).

So what's the problem? Well the problem lies in the fact that what Luzerne County had was a display that consisted almost entirely of the Nativity and Menorah. To me that looks like the Luzerne County government supporting/advocating a particular set of religious beliefs (namely those that are Jewish or Christian). The local government exists to serve all the residents of the county...those that are Agnostic, Atheistic, Hindu, Buddhist, Religiously Confused, Sikhs, Muslims, Zoroastrians, etc. IN ADDITION to those that are Jewish and Christian.

The solution to this problem is simple, and was noted by an ACLU lawyer who I heard speak on the Steve Corbett/WILK show: simply add things to the display so that it's not just a Jewish/Christian display but is in fact a holiday display.

So this holiday season let's keep things in perspective: evil judges & corrupt officials present far more of a problem to the residents of Luzerne County than does the temporary removal of some plastic on public grounds.
Created By Stephen Albert at 9:45 AM