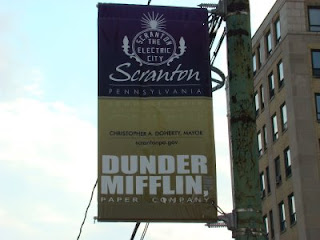 I spent about two to three hours last night going through all of the picture & video files that I have, spread out among various files and folders, consolidating them all onto my 6gb Seagate Flash drive. I also ended up trashing about two hundred files, most of which were .bmp copies of .jpg files (my old scanner used to scan just as .bmp files and then I'd save them as .jpg). The net result is that now all of my picture files are in one spot, which is a good thing. I just need to be more disciplined about keeping my stuff organized.


This particular picture was taken early this past spring during a walk through downtown Scranton.


I do like taking pictures, by the way. Like a lot of things I do, I'm not entirely serious about it as a hobby, but never the less I think I do it well enough that I can be happy with the results. Of particular interest to me are older buildings, although if you look at the number of files I have by category, the folder called "My Girls" has the most.

One of the biggest photographic projects I ever did was to document the demolition of the old Hotel Casey. All told, I probably took about 70 pictures of the hotel coming down. Most of them are burned onto a CD, but I do keep a few on the drive. If you are interested in the topic, let me know and I'd be glad to share the pictures. Here's one when about 60% of the hotel had already been taken down: 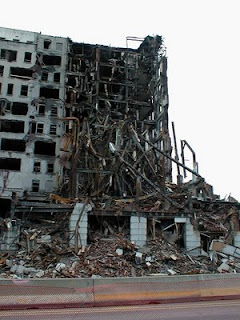 The hotel was originally constructed as an 'L' shape facing Lackawanna and Adams. A wing was added onto the hotel later to create a 'U' shape. What you see above is the remainder of the first floor corner and the added-on wing.

Now these pictures were taken with an old Olympus 1mp camera. It was the standard equipment for cameras at the time, including 3x zoom. My current camera is a Sony DSC-H7 8.1mp camera with a 15x zoom. It all all sorts of bells and whistles, including complete manual adjustments, night shooting and sports/burst shooting mode. It also takes great movies (and with the 15x zoom, you can use the movie camera from, say, the back of an auditorium). I've always found the picture quality of Sony's cameras to be just excellent.

I can see getting more into this as I get older. Again, like a lot of things, I don't do this necessarily to be good at it, but rather it's just something to feed my "attention span of a retarded gnat" head.

Speaking of attention span, I had better get some, as work fast approaches.
Created By Stephen Albert at 7:05 AM

Email ThisBlogThis!Share to TwitterShare to FacebookShare to Pinterest
Labels: Me, Scranton