Preface - This was written more than a year or more ago, but I never got around to finishing it until now.  I'm dedicating it to my late mother, Doris J. Albert.


The math-heads out there probably already know what an inflection point is, but for the rest of us, a definition can be found HERE.

A point on a curve where a sign changes; for me, that point would be from a negative to a positive.

Allow me to digress.

As I noted on here many times over the years, my life has been through a series of changes.  Now some times life brings you change; think of the death of a loved one for example.  Other times, change looms over you, as in you know it's there, and while you may do your level best to avoid it, it never goes away until executed (or you feel like you have been executed).  I think that we all have some of both in our lives, truth be told.  Well I know we do, as everyone has changed thrust upon them.  I also believe that we all have opportunities for change lingering over our heads.  Sometimes we grab the change, sometimes we ignore it.  I know people, for example, that have spent decades ignoring the real need for change in their life.

Whether we are ready or not, the need for change is always there.  It's as part of our environment as the air is, and I'd argue just about as vital.

What's fascinating for me is that the second kind of change (the change looming over you) is something like the current in a river:  it takes you places, and sometimes not the places you expect.  The trick is to:

a) Get in the river

b) Not fight the current

Far easier said than done, especially if you're not well equipped for such adventures.

As for me, I was born and bred into an environment that passively resisted change.  It's not so much that I was told "change is bad" as a kid, but rather, I wasn't really taught to, if you will, be willing to get in the (above referenced) river.  I think part of that was basically just parental bandwidth, as when you are a single parent raising four boys (all a year apart, mind you), it probably takes all you've got just to feed, provide clothing and prevent general anarchy among your children.  And with four boys, there was a lot of anarchy.

Simply put, I just don't think my mother had the ability to teach us much in the way of nuance.  For us, it was really all about working hard (our bedrooms were always neat and clean, as was the rest of our apartment), lots of Catholic guilt, and mostly trying to avoid getting yelled at by Mom.  Now in the grand scheme of things, "lack of nuance" beats the crap out of, well, getting the crap beat out of you.  And all of us were in fact well fed and fashioned with the finest clothing from the 70's. 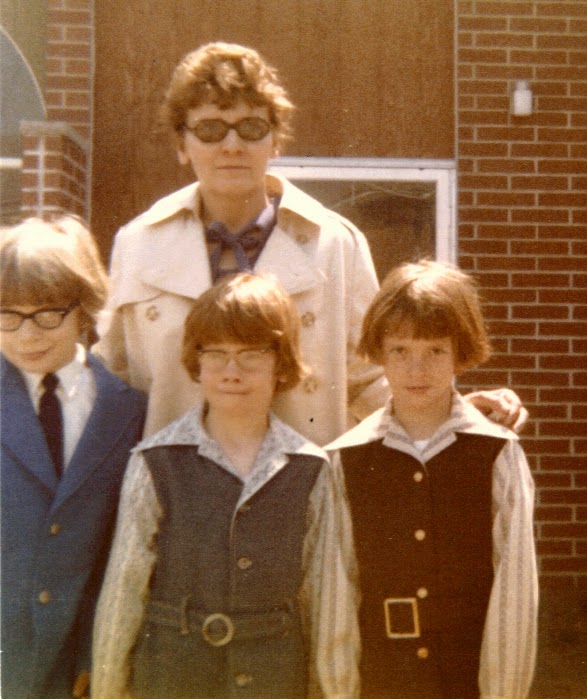 
But we (well really "I", as I can't speak for my brothers) were never the less ill equipped to handle bends in the river that life throws your way.

How did I respond to all of this when I got older?  By putting myself into environments that were markedly similar to how I was raised.  I basically muddled my way through change, brooding over how to manage the "looming over you" stuff.  Change was a threat, something to be avoided.  For the longest time I did just that...as I was raised to, and as I was conditioned to...I avoided change for as long as I could, then I just walked though it like someone walking over hot coals.  I was lucky though in the sense that I seem to have been born with the genetic coding for inquisitiveness, which eventually began to expose me to different ways to think about change (as well as a myriad of other things).

So how then did I end up jumping in the river of change?

Well I am not entirely sure I have learned how to jump in the river.  I do know that I am less apprehensive about it.

Anyway, wearing my professional hat for a moment, I can tell you all with 100% certainty that adults learn best through experience.  By "experience" I specifically mean those points where new knowledge is tied to old knowledge and that knowledge is then tied to actions that cause a result.  Think about learning a new language for a moment:  you learn how new language equivalents to your current language words (knowledge), you then practice them (action) and then you go on vacation and order baguettes in a French restaurant (result).

Taking the above in to account, for me I haven't learned anything grand...no secret formula for managing change better...but instead have simply learned to give myself permission to try.  "Try" as in...

In the end, it's the simplest things in life that are usually the most profound; simple as in "don't be as afraid of change as you should be afraid of things not changing".


(*) Probably the most insightful thing anyone has ever said to me in my entire life came from my late mother; when I was going through a particularly difficult time in my life, she told me that part of the problem was that "you don't like to lose"...and she was right.  I don't, but I suspect the trick is to both know when it's smart to actually compete in the first place and to remember that sometimes you "win" but not coming in first.

Created By Stephen Albert at 10:37 AM