Poor Rick, the Gays are being mean to him 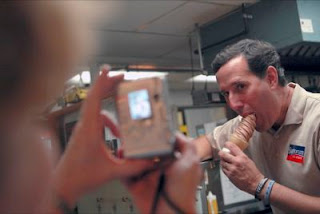 Rick Santorum's claim that gays have declared a "jihad" against him has been widely reported by the likes of Gort (HERE) and Justin Vacula, so I'm not going to retread the facts.  What I am going to do to is to note here what I've noted in other places.

Well Rick Santorum is your classic bully.  Like any bully, he picked a "target" that he thought would not really fight back.  In his case the "target" was the gay community.  Why pick on the gays?  Well demeaning homosexuals is music to hears of some religious conservatives, those who somehow feel that homosexuality is a communicable disease.  It's a cheap way to get votes with a certain crowd.  Anyway, the gay community did something rather unexpected by Santorum....they decided to fight back.

Yes, those darn gays decided to actually fight back against the bully.

Like most bullies, Rick almost immediately started to cry.  He has whined about the Urban Dictionary definition for his last name.  He cried that his kids can't Google their father's name without obscene references appearing.  He is moans about the "gay jihad".

Sound familiar?  This is no different than the average junior high bully running back to his/her mom after the "target" decided not to take it any more.

So to Rick Santorum I say this:  You reap what you sow.
Created By Stephen Albert at 7:32 PM