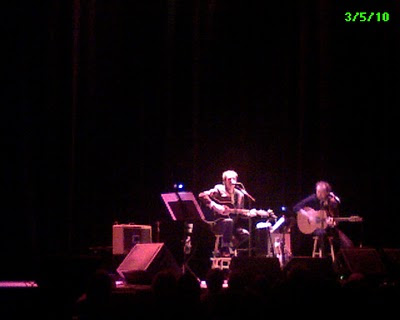 I'm not a really big Kinks fan, but I attended the Ray Davies concert last night at the Scranton Cultural Center and I absolutely have no regrets. Why did I go if I'm not a big fan? Simple: Ray Davies is right up there with Paul McCartney, Pete Townsend, Brian Wilson, and a select group of others who fall into the "living musical genius" category. This is the guy who gave us "Lola" and other songs from the British Invasion that became part of the lexicon of our popular culture.

Ray Davies sounded simply outstanding. The voice was in great shape, and his playing (and that of the supporting act & his side guitarist) was outstanding. Even if you didn't know all of the songs...which I didn't...you could still appreciate how well they were performed. In an era were most of the Top 10 consists of "artists" who don't write their own material, don't play a damn thing and use electronics to enhance their vocals, this performance was an example of what popular music was should be.

The only down side? There were probably a few people in the audience who a couple of sheets to the wind, but so be it. Everyone seemed to have a great time, and no one got hurt.

This concert, along with the show David Gates show I attended a few years back, are probably the closest I will ever come to hearing real musical genius live (I missed the Brian Wilson concert last year). Well worth the investment, even if he didn't play Do It Again (my favorite Kinks song).
Created By Stephen Albert at 7:06 PM

Email ThisBlogThis!Share to TwitterShare to FacebookShare to Pinterest
Labels: Music

I was at Ray's show at the Scranton Cultural Center on March 5th. Ray was at the top of his game. I was a little apprehensive about an acoustic show because I had talked several people into going to the show, some of which where not at all familiar with the Kinks/Ray's work. Everyone came away impressed including my 25 yr old secretary who to her amazement recognized most of Ray's tunes. It was a nice touch that the "paper plates" made an appearance at the show. Ray read several of the plates and included songs like Ducks on the Wall and Alcohol, that I'm sure were not on his original play list. Ray and Bill Shanley really pulled of the acoustic show and The 88 help bring the show to a rousing conclusion. God Save the KinKs!!!

Us Kinks fans likes to (hic) drinks a bit.