Spiraling Towards the Legal Blackhole 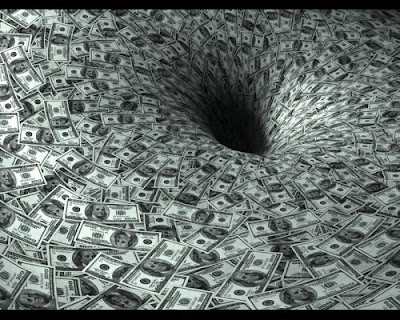 They say that when a super-massive star ends it's life, it can become a blackhole, which is an object so massive that it literally collapses in upon itself. Any matter or energy going near the blackhole will eventually be sucked up into it, all be it potentially after spiraling around the edge of the blackhole (known as an Event Horizon) for what seems like forever.

On a related note, in this past Thursday (the 10th), this little ditty was published in The Scranton Times (and Citizen's Voice in "Hayna Gulch"). While the road may take a while to travel, I have no doubt that in the end, the nation's most infamous crooked judges, Ciavarella & Conahan, will end up spending the rest of their lives in a hole of another sort.

Think of Ciavarella & Conahan as being like chunks of matter spiraling around a blackhole...doomed to eventually be consumed by a giant nothing. It may seem maddening that justice is taking so long to be served, but I like think of it this way: every day they get to see what's left of their lives (and their money) slowly spiraling away. Justice? Nope...nothing could undue what these two have done to others, but the fact that their fate is inevitable is of some comfort.

Enjoy the view guys.
Created By Stephen Albert at 4:06 PM

Email ThisBlogThis!Share to TwitterShare to FacebookShare to Pinterest
Labels: Ciav/Con