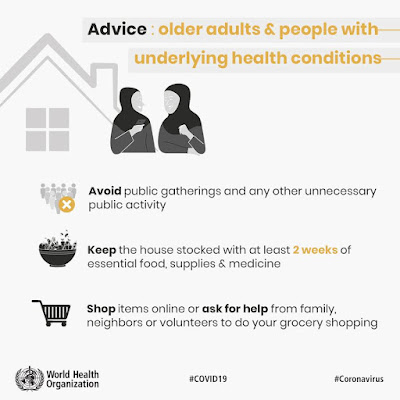 Day 42 of this quasi-documentation, and while I have little hard evidence to support the following point, I'll make it anyway:  It "feels" like things are getting better.  At best, well, maybe I'm right.  At worst?  Well, I'll gladly accept criticism for unwarranted optimism, as the converse is a place I've been to in my past and I have no desire to return.  In the end, we only get so much time here, so it's best to make the very best of it.

The above isn't designed to diminish the craziness that many are experiencing these days.  I was just talking to Ms. Rivers about how much this is wearing on her, being a full-time home-based worker now (considered essential by her employer).  I get that by the way, although my experience as someone in the job market now is certainly different than her experience.  Of course, there is the obvious to that last point, namely that I have more discretion as to how I use my time.  Discretion being a keyword in that last sentence.  Prior to having lost a job, a was under the uneducated opinion that the full-time job of someone who is out of work should be finding new work.  Experience teaches me that this is not entirely true, as (at least for some professions) it's simply not possible to job-search full time unless you are in a very large employment market.  There just isn't that much under your control.  Part of this whole thing of finding a new position is luck, all be it one sufficiently lubricated by hard-work.


As for the specifics of my current situation, well, I'm lucky (there's that word again) in that I have one or two things that might pan out for me.  I take nothing for granted, by the way, and if I do land something over the next two months or so, well, it will be a blessing.

Speaking of blessings, I was thinking yesterday about how these transition times in our lives have a purpose.  They are here to teach us things that can only be fully understood in the past tense.  Sometimes the profundity of a situation would be too much to bear if we even could understand it in real-time.  Best to just try and experience things as they come, and save the analysis for another time.

Being a creature of routine, I enjoy having tasks to perform.  One such temporary tasks came in the form of one the many "Facebook Challenge" whereby you list the 20 albums that have influenced your musical taste the most.  For those not on the Facebooks (i.e. Ms. Rivers, although I'm working on that...), here's my list:
I know, that's hardly a diverse list, but it has the benefit of being honest.  I could have listed a few more, but as it stands it's a good list, and I enjoyed putting it together.  What's not on the list?  Heavy Metal...as in I just don't enjoy it.  Classical...there is a lot of some stuff I like, but it's hard to put that into a single album.  Country...outside of Johnny Cash and an occasional dose of Vince Gill, well, it doesn't do much for me.  Rap/Hip-Hop...not my thing (obviously).  Punk...I like *real* punk, as in the Sex Pistols, Iggy and the Stooges, etc.; not what some call punk now, i.e. Green Day.  As a side note, calling Green Day a "Punk" bad is a bit like calling No Doubt a Ska band (it isn't; see The Specials, Madness, etc. for the real thing).  Just my opinion.

On that note, I have a better posting in the works, well as long as you consider more serious to be better.  Time to go.

Oh, and hey, let's be careful out there.

Created By Stephen Albert at 5:20 PM

Email ThisBlogThis!Share to TwitterShare to FacebookShare to Pinterest
Labels: Exile on Corona Street, Me, Me (Professional), Music