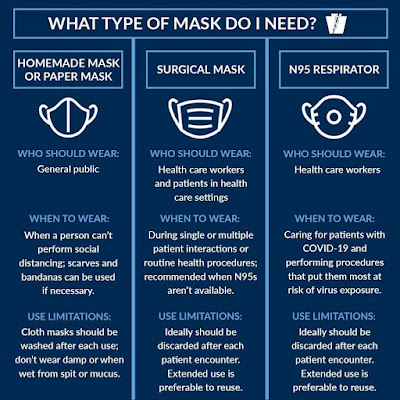 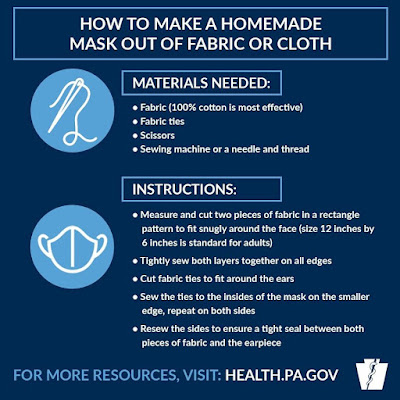 (It's now recommended that everyone wear a protective Mask.)


It's Sunday, and I'll readily admit that the days are running into each other, at least for me.  Granted that some of this has to do with my employment situation, but I suspect that the new normal of life during a pandemic would be creating some routine disruption regardless.  As a dyed-in-the-wool introvert, the actual "not being able to be around lots of people" part of this all isn't all that horrible; I know that's not the case for others.  In the end, I suspect that all of us will have some long-term adjusting to do, regardless of our style or personality.

This is the part where I think I should be posting something intelligent and inspirational.  I write that reminding myself that a trusted advisor of mine tells me that whenever I use the word "should" I'm simply creating an excuse to add some additional grief into my life.  Well, I am going to try to avoid guilt, but yet keep the "should", if for no other reason it works really well in the sentence.  Back on topic, there isn't anything I can add at the moment that will inspire anyone.  This is grim, next-level terrible stuff that is only going to get worse.  Like most trying times though, it is an opportunity to see the reality of others around us and in the public eye.  The lens for all of this is easy to use:  The heroes boost and support others, oftentimes selflessly.  This includes every ER doctor and nurse, as well as the police and countless other public safety workers.  It also includes the cashiers at supermarkets and other stores that sell stuff we all need to keep our significantly altered lives running.  Yes, this crisis will be resolved by those on the front lines of life, not the politicians, not the CEOs, not the overpaid athletes, and not the famous-for-being-famous crowd.  This is a kind of revolution of the ordinary but essential.  Let's just hope when the dust settles of Covid19 that we re-orient our priorities as a society to reflect the value of these folks.

Speaking of the ordinary, I am mostly done storing my old office stuff, with just a few things left in the back of my truck.  The process wasn't quite as difficult as I thought it was going to be, although I do think that, at some point, there is a book giveaway in my future.  The word "giveaway" used purposefully here, as every book I have means something to me, and trading them for money just seems tawdry in some way.

DEFCON 2
Funny story:  In 2011 I suddenly had a problem whereby I couldn't stop coughing and I had trouble breathing.  After a trip to the Emergency Room via Ms. Rivers, it was determined that I had suffered an asthma attack.  Prior to this, I didn't think I had asthma.  A few tests later, it was determined that I am highly allergic to a large number of things, including (unfortunately) cats.  Also high on the list was tree pollen.  Guess what is out in full force now?  If you say "tree pollen" you would be absolutely correct.  Among other things, this means that my sinuses are at about a DEFCON 2 in terms of their reaction to the stuff in the air.  This does vary from year to year (some years aren't too bad, others are far worse), but I can't think of a worse time to actually look like I am sick.  Note "look like", as outside of sneezing and a runny nose, I feel basically fine.  Going to the market sniffling and sneezing might be a bad idea though.  We'll see.

In The News
In the news this weekend was mostly nothing for me, as I purposefully decided to avoid the national news entirely.  The way I figure it, my normal obsession about tracking what is happening in the world could use a two-day break, as besides, the news isn't necessarily all that good.  This was hard for me to do, and I'll likely almost immediately start hitting the news sites tomorrow morning.  I do, however, give myself credit for at least trying.  Sometimes it's the little victories.

Finally, and as a side note, in THIS posting I commented on death rates for Covid19.  For the record, I'm not the only one:
https://www.giantfreakinrobot.com/sci/coronavirus-death-rates.html

Oh, and hey, let's be careful out there.
Created By Stephen Albert at 9:29 PM