I think that, in each of our lives, we have times and places where big, good things occur to, around, and for us.  There are also times and places where genuinely bad things happen.  Then there are the spaces in between.  Thinking back over this past week, I'd have to go with myself currently being in one of those spaces between.

The week was intended to be what we all expect a vacation to be:  Physically and mentally escape from the pressures of everyday life.  In my case, that's a fancy way of saying "not be at work", where "work" is how I earn a living.  That, however, was really not to be, as I found out during the week that several of my co-workers had lost their jobs.  These are good people, and while I don't want to make this about the subject of corporate layoffs, I'll simply say this:  I've been there, and I know the pain.  I know that all of them will land on their feet, and I'll do anything I can to help them in that regard.

So what do you do when you try to escape work but work does not escape you?

In a way, given my experiences over the past year or so, the above isn't exactly shocking.  Maybe it's a reminder of sorts, a lesson designed to teach the fact that you can't really escape certain things.  Maybe the trick is to just seek momentary truces where available.

I, for one, am back at work tomorrow morning.  Just about anything could happen.  I could be laid off.  I could be fine.  No amount of mental gymnastics will have an impact on that outcome, which by now has already been determined anyway.  Either way, I'm good with the outcome.  To partially quote Quentin Crisp in The Naked Civil Servant, "you can't touch me now", although in my case that's because I've already felt the business end of (the rotten to the core term) rightsizing once; the second time would just be anti-climatic.

Now that I have the machinations of the corporate world fully covered, it's back to the beach.  A few random photos and observations: 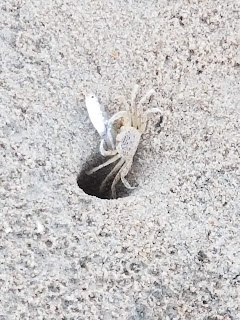 The sand crabs cared not our human concerns; for them, it's all about fish for dinner. 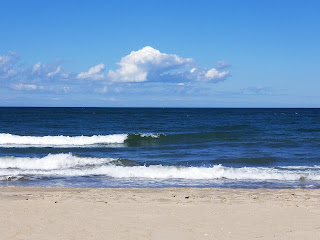 On Friday afternoon we sat on the beach for about two hours.  I brought a book.  Instead of reading it, I instead just watched the blue sky, the white clouds, and the rolling surf.  #TimeWellSpent. 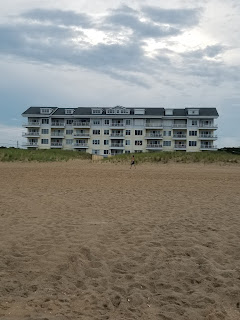 We really enjoyed our time in Sandbridge Beach.  There are no hotels there; just two large condominium complexes (the one we stayed at is above) and many homes.  It wasn't crowded and it was impeccably clean.

Finally, while I don't take too many videos (and I've never included a video I took on the blog before), I had to capture frogs at night.  They are as good a send-off as I can think of when thinking about the week that past.

Yes, the video is mostly just blackness.  Just listen to the frogs for 30 seconds.


Created By Stephen Albert at 5:23 PM

Email ThisBlogThis!Share to TwitterShare to FacebookShare to Pinterest
Labels: Me (Professional), Me. Deep Thoughts, Miscellaneous, Nature