On the (Vacation) Road, Part 4 - Momentary Lapses in Solitude

It was yesterday evening and the clouds were threatening, yet Ms. Rivers and I went to the beach anyway.  Since I had my camera in tow, I snapped a few photographs.  Probably my favorite is this one... 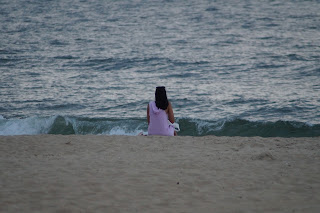 ...if I had to give the photograph a name, I'd call it "Random Lady on the Beach".  I don't know who this lady is (hence the random part) or why she was just sitting in the sand, watching the waves.  Was she contemplating some big decision?  Pondering the mysteries of the universe?  Just getting away from the rest of the family for some solitude?  I'll never know, and that's okay.  I look back on the beach trips taken when my daughters were younger and there were many times when I would find opportunities to seek some solitude.  Thinking back to then, my over-riding thought now is "how did I manage to do all of that back then?", where "that" was the pressures of a difficult job, helping to raise three daughters, and a few other things that don't belong in a public blog posting.  Yet here I am now, around to tell the tale.  Anyway, I hope that the Random Lady on the Beach found her momentary lapse of solitude.

That was a great photograph.  An hour or so after that photograph was taken we had some lightening in the area.  I did my best to try and capture a strike, but I wasn't in a great place and had mostly bad luck.  The best I can offer is the following... 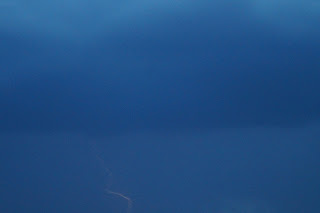 ...if you look closely you can see the faint glow of a lightning strike that had just occurred.  In photography timing is everything, and sometimes you just miss.  All in a days vacation.

Sleeping has been something of an issue for me this past three nights.  It's not falling asleep...I don't have an issue there...it's what happens once I do fall asleep.  On most nights some of my dreams seem more the like the ether-mescaline fueled delusions of Hunter S. Thompson driving through the desert, but these past few nights have been intense even by my standards.  The one that I can still recall with some clarity from last night alternated between my trying in vain to install up a light post in our back yard (something I've been thinking about doing in the real world) and not being able to finish some big presentation for work.  That big presentation, by the way, was projected onto an enormous screen, and I was being critiqued by this older foreign gentleman.  I think there is a message in both threads*, some of which probably (again) isn't fit for a public blog posting.

I'm not sure what to do about the above odd mental sights and bizarre dream-visions**  Seeing as though this is a vacation, making it prime-time for deep, contemplative thoughts, I should ponder some more on it.  Well, truth be told, that's not really all that accurate.  I have pondered some of the work stuff before.  Here I am though, well into my career, and I seem to be a bit, well, professionally adrift.  There's a certain thread* to this posting, as I started off with a photograph of someone sitting on a beach contemplating and here I am, having my subconscious more or less forcing me into contemplation regarding my professional life.  Cue Elton John & Circle of Life.

On that note, it's time to put this posting to bed and fully start the new day.  Maybe a walk is in order while others (smartly) sleep.

* * * * * *
(*) I work with a few folks who love to talk about "threads".  As in the "threads of a story".  That makes me cringe somewhat, although not as much as the twisting in American English of the word "skill", as in "he needs to be up-skilled" and "we have to create some up-skilling opportunities".  Can't we just use "learn and learning" instead?

(**) Subtle reference, made strictly just for my own enjoyment, of a book I enjoyed many years ago.  You can find it HERE.

Created By Stephen Albert at 8:05 AM

Email ThisBlogThis!Share to TwitterShare to FacebookShare to Pinterest
Labels: Books, Me (Professional), Photography