On the (Vacation) Road, Part 6 - No So Vacation-esque Thoughts

Some folks I know received some sobering news yesterday afternoon.  I'm not going to share the details, but suffice to say that it's a reminder that in this day and age, you really can't take anything for granted, no matter who you are and what you do.  What I am going to say is that I am glad to know these individuals.

Outside of WhatsApp-ing like a maniac (see above), yesterday was spent at an outlet center, where I bought a pair of red Chuck Taylor Converse sneakers.  It's the first time such things have graced my feet since Gerald Ford was President.  I hadn't planned on buying sneakers, but the hole in my current daily pair sort of made the idea self-evident.  I'll end up seeing just how well my feet feel in shoes that have less of an arch than your average Stanley Tools level. 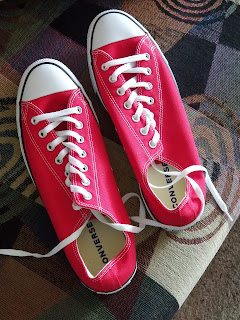 (Ruby Red Converse Sneakers:  If you click them three times you are magically transported to Shamokin)

New red sneakers noted, another sight to be seen was that of F-18 Hornets landing at Naval Air Station Oceana, which is conveniently on along the way between here and Norfolk.  The jets themselves can be seen frequently flying in the area of Virginia Beach. 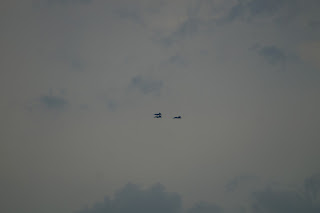 It's the sort of thing that you actually get used to after not too long a period of time.

Speaking of "getting used to" and "period of time", I did something last week that I hadn't done in over almost two years:  I attended an event related to my prior employer.  A colleague was retiring and there was a small get-together for her at a local restaurant.  Saying that I was somewhat apprehensive at the thought of going is a bit like saying "there might be a Tuesday next week", but I am glad that I went.  So many folks I know/knew have now left, either through voluntary or not-so-voluntary retirement that I no longer feel all that odd about the whole thing.  In fact, I really enjoyed connecting with folks I spent nearly three decades working with back behind Channel 16.  There's a not so difficult life experience to be learned from the whole thing, and maybe one of these days I'll actually grasp it.

As noted in the title, by the way, this isn't a very vacation-esque posting.

My favorite part about yesterday was going for a long drive in the evening.  This is simply a very beautiful area.  It's also incredibly flat:  I checked the altitude three times during a 90-minute drive and it varied by a whopping 2 feet (from 5 to 7 feet).  By way of comparison, I think I can walk out the front door of my house and walk 7 feet and see a change in altitude of 2 feet.  I should have brought my bike on the trip.

Today will likely be spent at the Jamestown Settlement in Virginia.  I've been saving my camera battery (I forgot the charger...) for this, and I hope to get some decent photographs.  Here's to a sunny and vacation-esque day.

Created By Stephen Albert at 8:11 AM

Email ThisBlogThis!Share to TwitterShare to FacebookShare to Pinterest
Labels: C-S, Me (Professional), Miscellaneous